The 12-turn, 2.5km Puerto Madero circuit is the only track on the Formula E calendar to have featured in all three seasons. But it provides a new challenge for Jaguar Racing, as the team builds on a solid start to its debut season.

Racing in the hot Argentinian sun makes the Buenos Aires ePrix a tricky test. It requires a careful balance of race pace and thermal management, which led to some of the championship’s most thrilling and unpredictable races.

The British team is looking forward to the challenge of racing on a track that pushes cars to the limits and rewards clear communication between driver and engineer.

What have you and the team been up to over the winter break?

“We have had a really busy time, and it hasn’t been so much of a break for the team. The technical team have been diving into the data we collected in Hong Kong and Marrakesh and the drivers have been conducting simulations as well as attending various media engagements. Ho-Pin Tung has been over to Shenzhen [China] to participate in the Jaguar ‘Art of Performance Tour’, Adam Carroll has been getting some laps in at the famous Nutt’s Corner karting track in Northern Ireland and Mitch Evans has been to the Jaguar Land Rover Ice Drive Academy in Arjeplog in the very north of Sweden.”

“We have also been in Las Vegas for the inaugural Formula E Vegas ePrix. Overall it was a great event and we are really proud of our professional sim-racer Greger Huttu who finished sixth. We witnessed a historic moment when the Jaguar I-PACE Concept hit the road for the first time, driving down the Las Vegas strip with Mitch behind the wheel. If you haven’t seen the footage yet, it is really worth a watch.”

“We have had a productive winter in preparing for the next races. This is the first circuit of the season that all our competitors will have previous experience of, so we have some catching up to do but we will relish the challenge and are looking forward to getting back on track.” 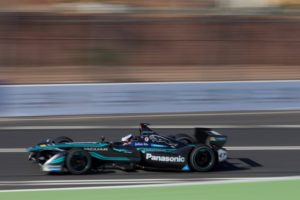 What will the team be looking to improve for the Buenos Aires ePrix?

JB: “This is the third time Formula E has come to Buenos Aires and it’s easy to see why the teams all look forward to coming here. This race is established as one where anything can happen. With the high ambient temperatures the drivers must manage their battery performance carefully. The circuit is challenging and the team must be able to react as the race unfolds and adjust the strategy to fit. It will be a big test.”

What are you looking forward to the most at the Buenos Aires ePrix?

“It was last year’s Buenos Aires ePrix where I attended as a reserve driver and was able to see Formula E for myself. The race was very exciting with so many overtakes, technical challenges and a surprise result. The location in Puerto Madero is also spectacular.”

What was it like to be back at Nutt’s Corner?

AC: “Nutt’s Corner is very special to me as it’s the track where it all began for me. I’ve spent so much time karting at the track that I could drive it in my sleep. I know every corner like the back of my hand.”

What’s your take on the Buenos Aires ePrix circuit?

“The circuit looks awesome. I’ve really enjoyed driving it on the simulator. Of course, most of the other drivers have some experience of the real track but we are as prepared as we can be. Adam has told me all about the awesome atmosphere. It promises to be an exciting weekend.”

How was your trip to the Jaguar Land Rover Ice Drive academy in Sweden?

ME: “It was incredible. It was a once-in-a-lifetime experience, especially for someone like me who grew up in a warm climate. The driving experience was second to none. I won’t disclose too much to spoil the show that will run on SuperCharged (CNN International) later in the season, but I managed to some pretty good drifts in the Jaguar F-TYPE out on the ice.”

Alonso: This is more or less where we expected to finish

A new special event at Peugeot Avenue Paris: the thrills of Dakar