With the 3 non-European rounds out of the way, MotoGP is in Spain for the 4th round of the 2017 season, scheduled to take place from 4 to 6 May on the Circuito de Jerez. Opened on 8 December 1985, this track has hosted the premier class since 1987. Oddly enough, however, in 1988 the race was labelled the Portuguese GP because the Spanish GP was held in Jarama.

In 1992 it became the first track in the Championship to replace the hay bales with airfences. The 4.423 meter of the track alternate between slow, fast and very fast corners. The 13 turns (8 right-handers and 5 left-handers) represent 31 percent of the total length and provide numerous places for passing.

The significant changes in slope demand a bike that handles well and that is well balanced, in addition to being stable in braking.

Once again this year, 100% of the bikes participating in the MotoGP championship are equipped with Brembo brakes and Brembo’s engineers have assigned a difficulty index for the brakes to each circuit on the calendar.

According to the Brembo engineers who assist all the MotoGP riders, the Circuito de Jerez is the most demanding track on brakes in the first third of the season, in other words, out of the first 6 Grand Prix races. On a scale of 1 to 5, it earned a 4 on the difficulty index, the same score as Aragon, Buriram and Brno.

On every lap, the riders will have to use the brakes 11 times for a total of 33 seconds. In absolute terms, that is not excessively high, especially if compared with the 38 seconds per lap at Austin and the 37 at Losail. However, on these two tracks, the lap records range from 1:55min to 2:05min, whereas at Jerez lap times are 1:39min and that gives the Spanish track the highest percentage in the championship of time spent braking: 33 percent.

The presence of 3 moderate braking sections, in other words, with less than a 35 km/h drop in speed, translates into an average race deceleration of just 1,07g. Lowering this average are the values of 0,7g on turns 4 and 7 and 0,8g on turn 10. Only Austin, with 0,92g, has a lower average value.

Adding up all the force the rider applies on the Brembo brake lever from flag to flag, the value is greater than 140 kg, a value that Losail and Valencia also reach. In practical terms, on each lap, the rider has to apply a force of 52 kg. 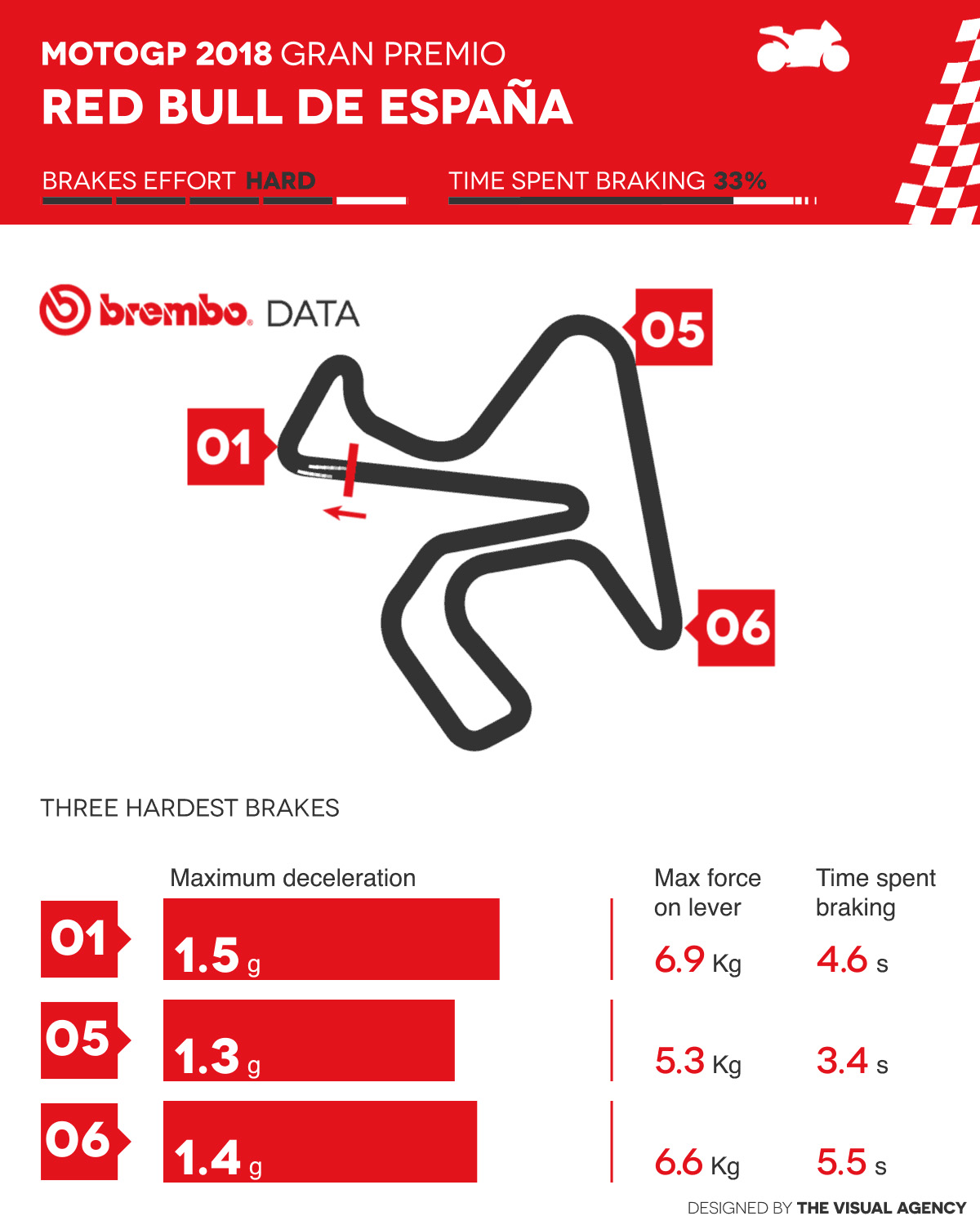 Of the 11 braking sections on the Circuito de Jerez, 2 are classified as demanding on the brakes and 5 are of medium difficulty. The remaining 4 have a low impact on the braking systems.

The most complicated braking section is on the first turn (Expo 92) that comes after a 600 meter straight, which is the longest on the track. The riders begin to brake at 281 km/h and complete the operation only after 4.6 seconds, during which they cover 219 meters. In order to drop to 85 km/h, they apply a load of 6,9 kg on the brake lever and undergo maximum deceleration of 1,5g.

Also noteworthy is the braking system’s 10,2 bar on the second turn, the equivalent of about 7 times the pressure of beer on tap. The MotoGP bikes brake for 3.3 seconds to set up the turn at 66 km/h, but the deceleration is only 1,1g.

The @circuitodejerez honours the 12+1 legend by changing it’s name to Circuito de Jerez Ángel Nieto ahead of the #SpanishGP ?#MotoGP pic.twitter.com/MxOzYommaO