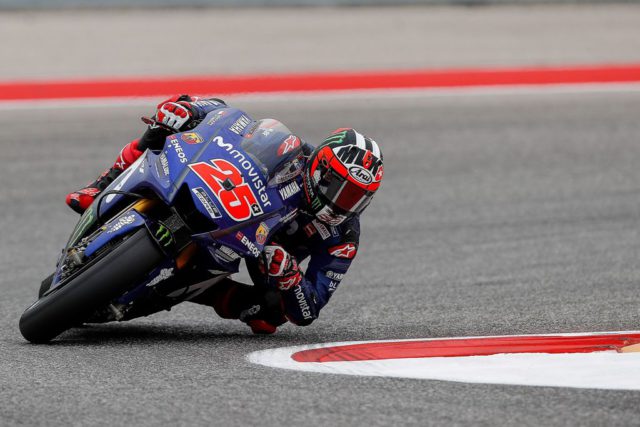 Maverick Viñales, Andrea Iannone and Johann Zarco will start from the first row at the Circuit of the Americas after Marc Marquez’s penalty. The Honda rider won the pole position for the Americas GP from the MotoGP championship but later received a penalty for an incident with Viñales.

“For sure I’m very satisfied”, Viñales commented after qualifying

“It’s been a long time since I was on the first row. I think we can do a great race. I felt really good with the tyres, especially the rear. We still have a little room to improve. Race by race I’m finding my own bike, my own style, and I still have a margin to push more. I’m quite happy and we’re going to try to be even faster. We had great pace in FP4 and we have to keep pushing. I think fighting for the victory will be difficult, but not impossible. I feel good and I feel good on the bike, so let’s see.”

“And I have a really good feeling with the bike now. We’ve worked really well this weekend, practice by practice, the engineers have done a great job and we were able to improve. We’re not completely ready for the race, we’ll certainly use warm-up to fine tune some settings. But I think that’s the case for everybody. It will be a difficult race, especially as Marquez has such a high pace, but you can never say never and I will push and try everything! I’m happy to start from the front row. We’ve worked really hard in the last year and a half so I really want to bring a good result to Suzuki.”

“I was glad to find dry conditions, so I was able to push a lot in case of rain. Finally, I got a good lap time for the qualifying and in the session, I used two medium tyres, because we don’t have some extra grip with the soft ones, it’s almost even worse. This disturbed me a bit, it was quite strange. Anyway, we were able to manage it well and it’s great to be competitive. I’m going to push for the podium and I really hope I have the pace to do so. I want to rest myself and try to keep the pace until the end of the race”, he explained.

What’s the quickest way around the #AmericasGP? ??

Michelin: Termas de Rio Hondo – a track that can be very hot and...

McLaren returns to its original colours