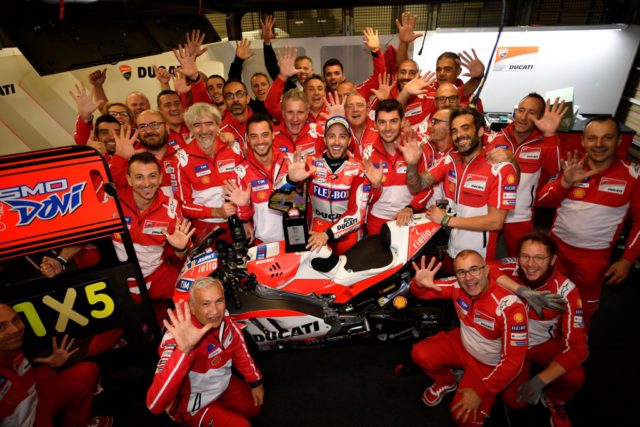 Andrea Dovizioso powered to his fifth win of the year today at Motegi at the end of an exciting race and a terrific scrap right down to the final corner with Marc Marquez. The Ducati Team’s Italian rider has now reduced the gap in the overall standings to 11 points to the Spanish champion, with three rounds left in the 2017 MotoGP World Championship.

Dovizioso, who started from row 3, moved up to third in the early laps behind Danilo Petrucci, who led until lap 12, and Marquez. Once he had passed the Pramac Racing Team rider, who eventually finished an excellent third at the flag, Andrea began to chase down Marquez up at the front. Dovizioso then caught and passed him on lap 21, but three laps later Marquez was back in the lead. The Ducati man didn’t lose touch with his title rival however, attacking four corners before the finish to hold onto his first place until the chequered flag.

Jorge Lorenzo eventually finished in sixth place after starting from the second row. The Spanish rider got off to a good start and led during the opening lap. But then he dropped a few positions following a contact with Johann Zarco and suffering from a poor feeling with rear tyre grip. Six laps from the end Jorge began his recovery from ninth. After passing Maverick Viñales, Aleix Espargarò and Zarco, he finished the GP of Japan in sixth place.

MotoGP returns to the track next weekend at the Phillip Island circuit, the venue for the Australian Grand Prix.

Neuville: The wide open 2018 title fight is a great advert for WRC