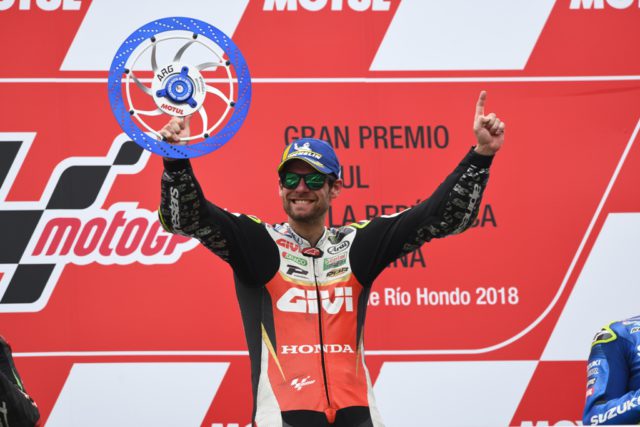 LCR Honda CASTROL rider Cal Crutchlow produced a brilliant ride to emerge victorious in an action-packed Argentina Grand prix on Sunday. Mixed wet conditions, a delayed start, penalties and crashes ensured it was a wild race. But Crutchlow held his nerve superbly to see off the challenge of Johann Zarco. He clinched his third career MotoGP win and the 750th for Honda in the premier class.

Crutchlow started from the fourth row. The LCR driver moved through the field. He also took advantage of a start penalty that was handed to a charging Marc Marquez. The Briton moved past Zarco and Alex Rins to claim second. He hit the front seven laps from the end when the leader and polesitter Jack Miller went wide at a corner. Crutchlow managed the closing stages expertly, keeping Zarco at bay to seal a memorable triumph. The Briton is currently leading the world classification with 38 points.

750 wins later and it’s @calcrutchlow who’s standing on the top step at the #ArgentinaGP ? pic.twitter.com/Di9892fuI2 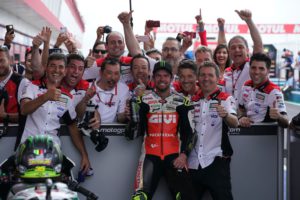 “It was nice to win, but it was to be expected to be honest. I came into the weekend thinking I could leave here with a chance of being first or second with Marc (Marquez) and we ended up winning. I was comfortable in the battle, I felt I took no risks and stayed with riders that I probably could have dropped should I have needed to.”

“We have to be pleased, the team has done a fantastic job in the last two races and I think we could have fought for victory no matter which circuit it would have been this weekend. Now we go to Austin and we’ll aim for the top five and look to come out of there with strong points. This year I said I wanted to win some races! It’s really nice to be part of that group of riders that have been able to win these 750 races for Honda. I’ve been supported very well by them in the last few years and this year the support is even better.”

Did we mention that @calcrutchlow now leads the #MotoGP World Championship?

The first Brit to lead the premier class since the late Barry Sheene in 1979 ??#ArgentinaGP pic.twitter.com/bc3ncwwYrP