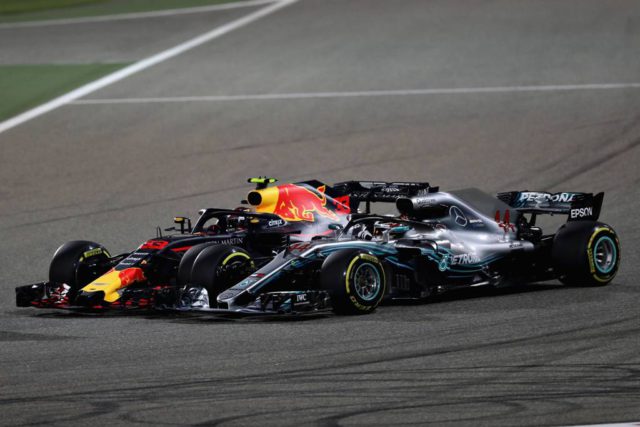 Lewis Hamilton and Max Verstappen had a crash during the Bahrain Grand prix when the Red Bull driver tried to overtake his rival. The Englishman continued and finished third in the race while Verstappen retired.

Later in the press conference he called the crash unnecessary.

“Ultimately, I had a coming together with Max and it was an unnecessary collision. There needs to be a certain respect between drivers. Maybe I need to go and watch the manoeuvre again, but it didn’t feel like a respectful manoeuvre. But ultimately it was a silly manoeuvre for himself, because he didn’t finish the race. And obviously he’s tending to make quite a few mistakes recently, so it was just unnecessary for him to do that. I can’t really remember at what stage of the race it was or why we were even in that position, but yeah, I don’t really care to be honest.” 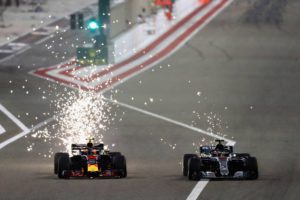 “I don’t know what Lewis did. We’ve all been in that situation, we fight someone, we go sometimes wheel-to-wheel, it’s close and you have a lot of adrenaline going”, the Ferrari driver explained. “If you have a microphone on a football player’s mouth, do you think that everything he says is something nice and is a nice message when the guy tackles him and maybe sometimes he fouls him or not.”

“So I don’t think it’s justified to give us this kind of shit questions and making up a story out of nothing if we are just racing and we are full of adrenalin and sometimes we say these things. I mean if I hit you in your face, you’re not going to say “oh, Sebastian, that wasn’t nice”. It’s a human reaction. Sometimes I feel it’s all a bit blown up and artificial if we have these questions, trying to make a story out of nothing. So, it’s not personal, don’t take it personal. So I think we should cut it right there, so now if Lewis can answer.”

Lewis – I’ve got your back ?@LewisHamilton @MercedesAMGF1 @ScuderiaFerrari#BahrainGP #F1 pic.twitter.com/wkqMrBcdic

As for the race itself, Hamilton added it was damage limitation.

Meanwhile, Verstappen demonstrated he was not happy with the stewards not taking action in their collision

“I had a good tow on the straight, the last corner was really good so it allowed me to stay close to Lewis. We got a bit squeezed but from the middle to the end of the corner I was ahead, I then felt a nudge from behind and could feel the puncture and therefore knew the race was likely over. In my opinion, there was plenty of room for the both of us to go around that corner and to say ‘no action taken’ is a bit harsh as I am now out of the race due to that contact on my left rear. If it was the other way around I’m sure he would want it looked into”, he commented.

Ekström: What Monaco is for Formula 1, is for rallycross Höljes

Viñales on pole in Valencia