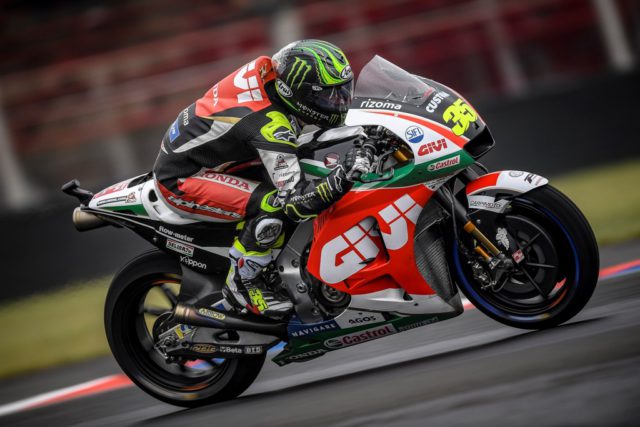 Honda rider Cal Crutchlow celebrated his first victory in over a year at a breathless Argentine GP which started in unfamiliar fashion.

The race at the Autódromo Termas de Rio Hondo in Argentina was the second of the season. All riders, apart from Jack Miller on pole, lined up on the grid on wets. As the track quickly started to dry and the race edged closer, riders began returning to the pitlane to switch to dry tyres. At one stage, Miller was the only rider left on the grid but the race start was then delayed with organisers citing safety concerns.

Following a meeting with the team bosses, it was decided that all riders except Miller would be moved several rows back, leaving the Australian to start out on his own leading to much confusion.

Marc Marquez caused a great part of the confusion and anger later in the race. He received a ride-through penalty from the lead after an earlier incident when he stalled on the grid. The Spaniard was charging back through the pack when he collided with Valentino Rossi in a battle for sixth which left the Italian on the grass with four laps to go. Marquez would finish fifth, but received a 30-second penalty for the incident with Rossi, leaving him 18th.

Cal Crutchlow took the lead with six laps to go and held on for the win in front of Johann Zarco and Álex Rins.

Sato won Indy 500, Alonso retired on the 179th lap with a blown engine