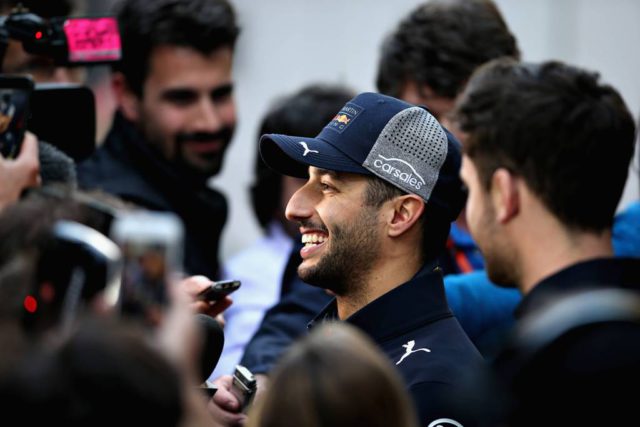 Daniel Ricciardo lives through an incredibly tense week before the Australian Grand prix. The first round of the 2018 Formula 1 world championship is also his home race. The Red Bull driver thought after the pre-season tests that the team had to find a bit of time. But the RB14 pace looked encouraging to him.

“Starting the F1 season in Australia means there is so much hype and so much build up, now with me being the only Australian on the grid there is extra attention, extra questioning and expectation. It’s a lot but it’s fun, it’s cool but it does mean I usually leave that weekend needing 48 hours of pure serenity and quietness”, Ricciardo commented.

In 2017 the Australian received a 5-place grid penalty for an unscheduled gearbox change. In the race he retired on the 25th lap with a technical problem.

“Melbourne in 2017 was a combination of my errors and some misfortune. I crashed in qualifying and then we had a technical issue for the race. We were all putting our hand up saying “my fault” last year so 2018 is definitely time to get what we deserve in Melbourne, or get what we came for, that sounds better”, Ricciardo said.

“Getting in the RB14 for the first time was really sweet, hearing it fire up and seeing it with the new bodywork gets you excited for the year. The RB14 compared to the RB13 at this stage last year is a lot different, to start with, getting into the car is a lot harder. There is a fair bit of aerodynamic change this year, real enthusiasts will see it straight away and spot the differences, the main one being the shark fins have gone and obviously the addition of the Halo.”

“I can’t wait to get the season started, I’m hanging out to get back on the track and these new cars are very fast, looking forward to seeing you all out there!”

1 week to the @ausgrandprix. Time to put away the @PolarisRZR buggies. It’s time to race ??#gopro 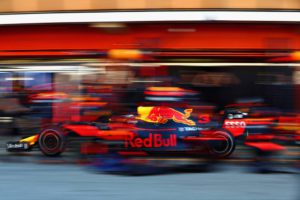 His teammate Max Verstappen explained that he always enjoys going to Melbourne as he likes the country and the temperature “which is always a welcome change compared to Europe at this time of year”.

“The fans are very passionate about racing and especially Formula 1 as it has a great history in Australia. I have only visited Melbourne and Sydney so far. I definitely want to explore the country a bit more as I’m sure I would enjoy much more of it”, he continued.

“Albert Park is not the easiest track to overtake on, we will try our best but the straights are not quite long enough and a lot of the corners leading to the straights are 90 degrees, this makes it hard to set-up a pass. Turns 11 and 12 are the fastest corners and really cool to drive, especially in qualifying with low fuel in sixth or seventh gear, I think it is about 270 kilometres per hour.”

“The trees around the circuit sometimes make your braking markers hard to spot with shadows, it’s quite normal on a street circuit but makes it more challenging for us to get it right. We are hoping to have made a large step forward this year and be competitive from the start, to have a fast car from Race 1 and continue for the rest of the season would be great.”