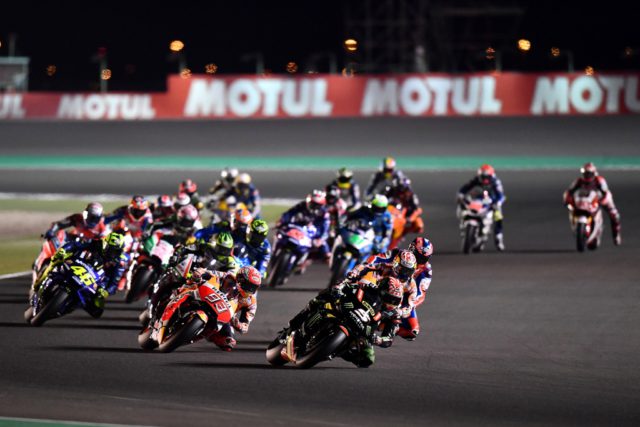 Starting from fifth on the grid, Dovizioso settled into a smooth and fast rhythm

Saturday’s pole setter Johann Zarco (Monster Yamaha Tech 3) initially led into the first corner. Then he headed a fast group of 10 riders for 16 of the first 17 laps. Zarco came under pressure from Dovizioso on lap 18. The Italian on a Ducati shod with a medium front compound tyre and a soft rear seized the advantage and took over at the front. Marquez – using a hard front paired with a soft rear – was close behind in second.

The audience witnessed another great battle as Marquez used his Michelin tyres to the full extent to get the drive and make a pass on his Italian rival. He briefly led, but Dovizioso came straight back and took the upper-hand in the push to the line to seal victory by a mere 0.027 seconds. Close in third was Valentino Rossi (Movistar Yamaha MotoGP). The Italian legend who celebrated signing a new two-year contract with his team took the final podium place.

It had stood since 2008 when Jorge Lorenzo posted a time of 1’53.927. He used Michelin qualifying tyres on the fairly new Losail circuit. Zarco’s time was 0.247 seconds quicker than the previous record. It was on a less grippy and ageing surface. The lap was even more difficult because of the dusty conditions. Fellow front-row position riders Marquez and Petrucci also bettered the previous best lap, with all three using tyres with the same compounds that featured in today’s race, again showing the wide performance attributes of the Michelin Power Slicks.

Conditions at the 5,400m Losail International Circuit had been difficult all weekend

High winds blew sand from the surrounding desert on to the track surface. This increased abrasiveness, but it didn’t hamper the performance of the Michelin Power Slick tyres as the whole field produced a spectacle of close racing.

Following home the top-three was Cal Crutchlow (LCR Honda). He had the honour or First Independent Rider for his fourth place. Danilo Petrucci (Alma Pramac Racing) took fifth and on the way set the record for the fastest speed at Losail, with a stunning 351.9Km/h, demonstrating that both grip and drivability are important factors of the Michelin Power Slicks. Sixth went to Maverick Viñales (Movistar Yamaha MotoGP), seventh to Dani Pedrosa (Repsol Honda Team), with early pace-setter Zarco in eighth. Andrea Iannone (Team Suzuki Ecstar) and Jack Miller (Alma Pramac Racing) rounded the top 10.

Michelin’s next MotoGP journey will be to Termas de Rio Hondo in Argentina. Round two of the MotoGP World Championship takes place on Sunday 8th April. 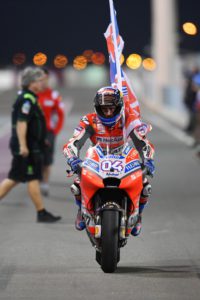 “What a great race to start the season and congratulations first to Andrea for taking the win and to the other guys for a great show. The wind created an extra ingredient that we were not really expecting and it blew a lot of sand on to the track, making conditions much worse than when we were here at the test recently. This, allied to having day-time practice sessions and evening ones – where temperatures were very different – made tyre choice for the race a more complicated affair. The riders all went for the soft rear which was the new compound we introduced in the winter tests and all the riders liked it, so that was really important for us.”

“We had a complete mix of all three compounds for the front, which again emphasised the choice we can supply to all the guys to give them different options and this was underlined with the fact that the three bikes on the podium were from three different manufacturers. We were pleased with the performance during the race and the tyres helped to produce another exciting weekend. This was highlighted with Johann’s stunning pole lap on Saturday, that was a very old record that was set on qualifying tyres, so to see it broken on our race tyres was very pleasing.”

Ogier goes to the DTM

Hyundai chases an elusive until now podium in Finland