Andrea Dovizioso was really happy after winning the first round of the 2018 MotoGP championship. The Ducati driver said that this success confirmed the improvements made by the team over the winter. 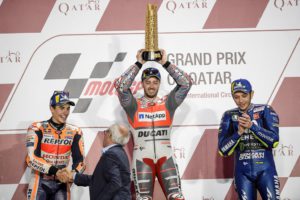 “I was able to manage the race well, even though I made a really bad start”, Dovizioso continued

“On the first lap I had to come off the gas, otherwise I would have crashed into [Alex] Rins I think, but then I began to make up places, trying not to ruin the tyres. Towards the end, after passing [Johann] Zarco, I tried to pull out a gap on [Marc] Marquez and [Valentino] Rossi but I didn’t have any more grip and was unable to increase my lead.”

“At the last curve I had to be very careful because I knew that Marquez would try and pass me, and that’s how it went. He closed the door on me even more than in Austria and Japan, but I passed him on the inside of the kerb and then took advantage of the power of my Desmosedici to stay ahead. Once again it was a great satisfaction!” 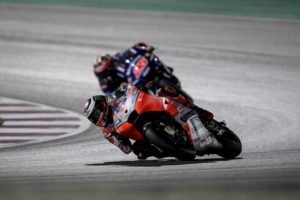 Meanwhile, Jorge Lorenzo did not finish the race. He admitted it was not one of the best weekends for him.

“I had a lot of problems and my crash was the result of a problem with the front brakes. Already on lap 2, I realized that something wasn’t right. I tried to manage the situation, but the problem was getting worse. I thought it was an overheating problem, but when I was about to catch [Andrea] Iannone I wasn’t able to stop the bike and I tipped myself off to avoid worse damage. Now we have to understand what exactly happened to prevent the same problem from repeating itself in the future. It’s a pity because I was lapping with good times and I think I could have got closer to the leading group”, Lorenzo explained.