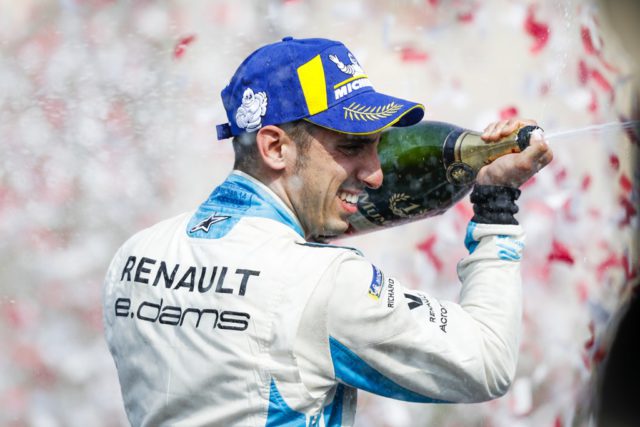 The first ePrix held in Chile was a real cliff-hanger that kept the crowd on tenterhooks right up to the last corner. Renault e.dams clinched their second podium finish on the bounce thanks to Sébastien Buemi. Nicolas Prost opened his score after a hard-charging drive, which bagged him tenth place.

Sébastien Buemi was among the quickest in the opening laps on one of the bumpiest and most slippery tracks in the history of Formula E. Although he had a slight off in free practice 1, he got into the SuperPole shootout after posting the fastest time in his group. He was in second spot on the grid, but lost two places at the start and fell back to fourth. After the safety car deployment, he stayed in the leading group until it was time to change cars.

With 10 laps to go to the finish, he used the extra power available thanks to the FanBoost to up the pressure on the Brazilian. After slicing past Piquet he continued to go pedal to the metal to close the gap to Vergne and Lotterer. The last three laps were absolute thrillers with the first five covered by a few tenths of a second. Despite being hassled by Rosenqvist Buemi fought off his attacks and crossed the finishing line in third place.

After kissing the guardrail in free practice 2 Nicolas Prost put on his best performance of the season so far in qualifying. He lined up tenth on the grid after being hit with a two-place penalty (missing the pit entry at the end of the session). When the lights went out Nico managed to avoid an out-of-control Lopez and pulled back three places before the safety car was deployed. Although he matched the pace of the front-runners he had to let Di Grassi through to conserve his battery’s energy before his car change.

The Frenchman lost precious seconds after being held up behind a car that was trundling down the pit lane. But he still emerged in ninth spot after his stop. At the end of the race, he lost a place and took the flag in tenth position.

Both Renault e.dams cars scored points helping the team to move up into fifth place in the teams’ championship. In the drivers’ ratings, Buemi has improved to fourth.

“We can draw a lot of positives from the race. Our pace was good in all conditions and it’s a big step forward compared to Marrakech. I made a small mistake in free practice 2 which is never ideal. But I managed to be in the mix in qualifying. In the race itself, my overall speed was pretty good as I had to make my stop a lap earlier, and I lost precious time behind [Oliver] Turvey who was trundling along. Although everything didn’t work out as we’d hoped I’m feeling pretty positive. We’re moving forward and I think we’ll soon be back in the top five.” 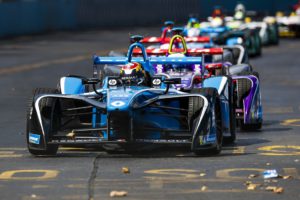 “We scored a good result in Chile with fourth in qualifying and third on the podium. But I’m a bit disappointed as I think our car was good enough to do better. I lost two places at the start and then some more time during my car change as we didn’t want to risk incurring a penalty. I’m pleased that I was able to fight off [Felix] Rosenqvist in the closing laps. Unlike in Marrakech, he didn’t manage to get past! The fifteen points are important for me and for the team. We’re now looking ahead to Mexico where we hope to do even better than here.”

Jean-Paul Driot, co-owner of the team

“Overall it’s a positive result for the team with both cars in the points and Seb on the podium. Even so, we’re feeling slightly bitter as we were hoping to be involved in the fight for victory as we started on the front row. The getaway wasn’t great like the pace in the first stint that wasn’t up to the level we expected. The outcome of the race was heavily compromised at that moment. Nonetheless, we managed to pull back a place and put Seb on the podium and get Nico into the points.”

“Since Marrakech, we’ve shown that we’re in the mix. The gaps are smaller than in previous seasons. And you have to put on a flawless performance to be in with a chance of winning. We’re going to focus all our efforts on analysing the data to understand what we were lacking to be even quicker in Mexico. The level is so high that it’s absolutely essential to score points with both cars in each race. Consistency will be our main objective in the rest of the South American campaign.”

Neuville leads after Day 1 in Portugal