The Citroen team managed to salvage points from Rallye Monte Carlo, the first round of the 2018 World Rally Championship (WRC). Kris Meeke scored 17 points but the beginning of the race was difficult. Meeke and Paul Nagle ran into trouble on Thursday evening’s opening leg – held after nightfall – on the snow. After dropping just under two minutes on this first stage, their rally headed in a different direction to that planned. Worse was to come for the team, as Craig Breen and Scott Martin as a stone lodged itself in one of their C3 WRC’s wheel rims and damaged the brake calliper’s bleed nipple. This meant that they gradually lost the brakes on the next three stages of the loop and despite attempts to perform repairs, they fell back from seventh to tenth place with the rapid loss of three minutes.

This stroke of bad luck was all harsher on them because it left them forced to open the road on Saturday, literally tracing a line in the snow for the crews behind to follow.

Meeke gradually fine-tuned his set-up, allowing him to grow in confidence and move back up into fifth overall, whilst Craig Breen took advantage of any opportunities to better his place. Kris claimed victory on the final stage and moved up to fourth overall. 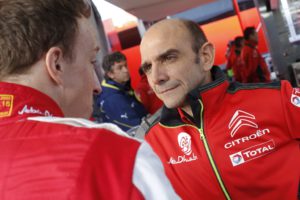 After the rally, the team principal of Citroen Racing Pierre Budar summed up the race.

What did you think of the team’s frame of mind during your first rally in charge?

With its unpredictable weather and the resulting difficulties in making the right call on tyre choice, you have to say that Monte Carlo is no easy introduction to the WRC! Having said that, I was very impressed by the way in which information was shared in the team, between the engineers, weather reporters, Michelin’s technician and so on. Communication was good and there was a constructive working atmosphere, and that augurs well for the future. Similarly, I’d like to pay tribute to the performance and unity of our mechanics, especially on Saturday evening, when they worked together to change the gearbox on Kris Meeke’s C3 WRC, whilst also adjusting the chassis settings, in good time.

How would you assess the performance of your drivers?

With the misfortune Craig and Kris suffered in the early stages, unfortunately, they both found themselves a long way off the pace very quickly, but they show exemplary strength of character to not get discouraged. Craig set some good times when the conditions were kinder to him again. As for Kris, after lacking confidence in the set-up at the start, he refrained from throwing himself recklessly into a fight that he knew from the outset would be difficult to win. He waited for his opportunity to come, showing great race management and experience. This approach shows just how much he has grown into his role as team leader. He has made a good start to the drivers’ championship, although we are well aware that we need to keep working in order to become even more effective on all surfaces.

What areas do you intend to work on for the future?

I think we got a clear idea of what was working well on the C3 WRC in some conditions and what worked less well. But Kris’ fastest time on the Power Stage showed once again that the car has the speed. When everyone is going for the bonus points, you can’t say it’s a second-rate win!

“It’s just cool to be on the podium in Austin”, Daniel Ricciardo said