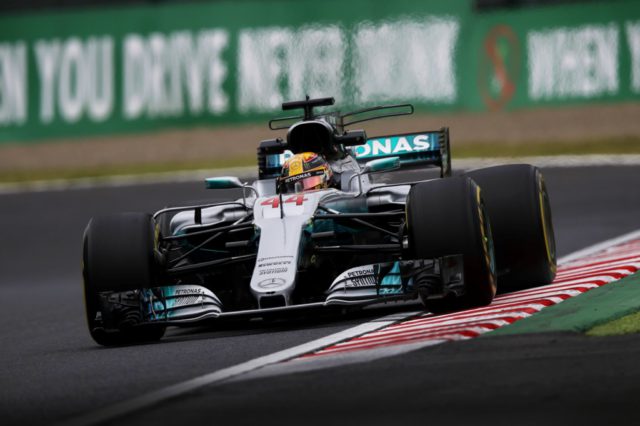 Lewis Hamilton won the pole position for the Japanese Grand prix grid. His Mercedes teammate Valtteri Bottas was second fastest but he has a 5-place grid penalty. Sebastian Vettel (Ferrari) was third in Q3.

After Jolyon Palmer and Fernando Alonso received multiple penalties for changing power unit components and Mercedes changed Bottas’ gearbox, Kimi Raikkonen also had a sanction. His was for changing the gearbox as well after the Finn’s crash in FP3.

Meanwhile, the track temperature had climbed to 27 degrees. Hamilton started in Q1 with soft tyres but later took on supersoft. Only Bottas and Raikkonen passed Q2 on soft.

Lewis was comfortable fastest in all three qualifying segments. The battle was really for the positions behind him. He also smashed the all-time Suzuka circuit record.

Bottas’ penalty means that Vettel will start alongside Hamilton from the first row. The second one will be occupied by the Red Bull drivers.

Romain Grosjean crashed 1:20min before the end of Q1 while trying to qualify for Q2. This incident took the chance of Pierre Gasly, Lance Stroll, Marcus Ericsson and Pascal Wehrlein to try continuing in the session.

In the second qualifying segment, Fernando Alonso managed to get tenth in the end. Despite that, the McLaren driver will be at the back of the grid tomorrow because of his power unit penalties.

#F1 – Find out the full results of the qualifying session of #JapaneseGP?? pic.twitter.com/2JeFfmfyca

Verstappen blames floor damage for his car’s pace in Melbourne

Sébastien Ogier back in the lead of Rally Monte Carlo