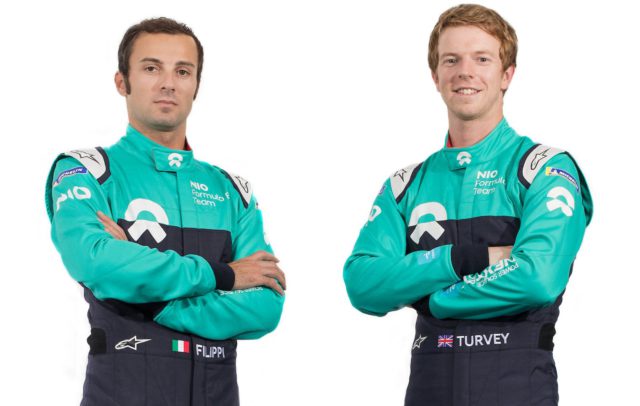 The NIO Formula E Team (formerly NextEV NIO Formula-e Team) has announced its driver line-up. It also revealed the Season 4 livery for its 2017/18 challenger at the official FIA Formula E pre-season test at Valencia Circuit, Spain. The team welcomed Luca Filippi, as its second driver alongside Oliver Turvey. The Briton remains with the team for a third full season behind the wheel of the squad’s all-electric race car, the NextEV NIO 003.

The NextEV NIO 003 sports an evolution of its familiar teal livery. The fresh design also features accents of performance red.

Since the season 3 finale in Montreal back in July, the team has successfully completed 15 full days of private testing.

“Over the summer we completed multiple seasons worth of testing mileage with the NIO 003 development chassis. It features an all-new rear end, the design of which came under the leadership of Paul Fickers (Engineering Director – Performance Programme).

Season 4 sees us welcome Luca Filippi on-board. I firmly believe that these two drivers will form a formidable driver pairing. Luca is new to the series, but he brings with him a wealth of motorsport experience. I am under no illusions that Season 4 will be any less competitive than last season. However, I feel that we are in good shape preparation-wise. The whole team is looking forward to the challenges that lie ahead. Bring on Hong Kong which is the home race for NIO!”

“Firstly, I would like to thank NIO for their continued belief and support in me. I am delighted to be continuing for a third season with the NIO Formula E Team. I believe we have grown together over the last two seasons and we have been able to make some good progress together. The whole NIO team has been working extremely hard on the new Season 4 car and in the development testing I have felt some positive changes in the chassis and powertrain. I am confident the team has made a step forward and believe we have gained a greater understanding of the car.

The growth and progress of Formula E is amazing. I am proud to be part of such a strong series with an exciting future. The competition is very high with the level of teams and drivers in the series. But I am confident if we continue to build on last year, where I consistently qualified strongly and took my first FE pole position, we can achieve our aims together to challenge for podiums and race wins.

I would like to welcome Luca to the team. He brings a lot of experience. And having raced against him previously, I know he will make a strong teammate. I know we will work well together to develop the car and build a stronger team. The new livery is stunning! I really like the contrast between the light and dark teal and the way it represents the NIO “Blue Sky Coming”. I can’t wait to get in the car at Valencia for the official test and for the first race in Hong Kong!”

“Let me first thank everyone in NIO for the great opportunity given to me. It is a new electric world for me and a new racing system oriented to the future that is full of talent and clean technology. So I am extremely excited to become a part of it.

During our first test run together in Spain, I immediately had a great feeling with the car and all the people in the team. To join NIO for S4 is a dream come true. And I am very much looking forward to working with Oliver and Gerry and starting this journey with everyone in the NIO Formula E team.”

Giovinazzi to drive for Haas in FP1 in Singapore

Felipe Massa to race for Venturi in Formula E