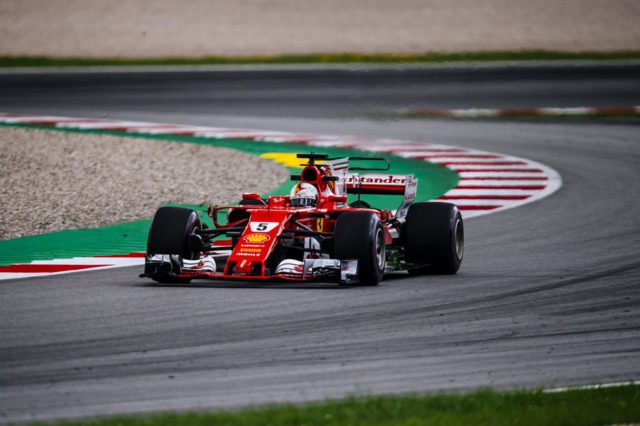 Sebastian Vettel lowered the Red Bull Ring lap record further to put Ferrari on top during final practice for the Austrian Grand Prix, ahead of Mercedes rival Lewis Hamilton, who suffered a brake failure late on. Vettel set a 1:05.092 on the Ultra Soft tyre during Saturday morning’s action.

Vettel and Hamilton had traded fastest times throughout FP3. Seb ultimately finished 0.269s clear, after Hamilton hit trouble in the closing stages. Hamilton, who heads into qualifying with a five-place grid penalty for an unscheduled gearbox change, suffered a dramatic lock-up under braking for Turn 3.

Hamilton held a wobble, as dust poured out of his front brakes, before running down an escape road, after which he recovered and crawled back to the pits.

Mercedes later confirmed a brake disc failure, though clarified that it was a problem on the team’s side,

rather than an issue with the components supplied.

After the controversy in Azerbaijan, there was also another moment between the title contenders. Vettel got caught up behind Hamilton on a hot lap and waved his hand in the air. Vettel backed off for a lap before pushing again and producing his low 1m05s effort. Hamilton this time moving to the side of the track at the exit of Turn 8.

Valtteri Bottas and Kimi Räikkönen followed in the other Mercedes and Ferrari machines, as Red Bull pair Max Verstappen and Daniel Ricciardo rounded out the top six.

Haas encouraging start to the weekend continued as Kevin Magnussen got into the 1m05s bracket, backed up by team-mate Romain Grosjean in eighth position. Daniil Kvyat and Carlos Sainz Jr. completed the top 10 for Toro Rosso, the latter bouncing back from an early stoppage when his car lost power at the exit of Turn 1.

Esteban Ocon and Force India were again on the fringes of the top 10. Renault and McLaren-Honda squabbled over the next four places, in the close midfield scrap. Nico Hülkenberg edged out Stoffel Vandoorne. Jolyon Palmer slotted in front of Fernando Alonso, who has reverted to Honda’s ‘Spec 2’ engine amid technical trouble.

Stroll: I believe we should be fighting for points in every race