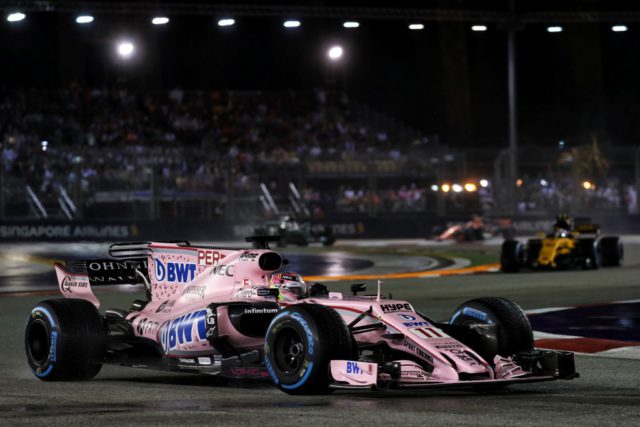 Force India was the only other team besides Mercedes with two drivers in the top 10 at the Singapore Grand prix. Sergio Perez finished fifth, keeping his points scoring record at the street circuit unbroken. Esteban Ocon was tenth.

“I’m really pleased to come away from such a challenging evening with fifth place”, Perez commented

“So many things happened during the race, especially on lap one when it was so difficult to see anything because of the spray. At the same time, I’m a little disappointed that we missed out on a podium because I think the second safety car period didn’t help our strategy.”

“We started the race on the full wet tyre, but we had to switch early to the intermediate tyres under the Safety Car and I lost valuable track position. Even so, it’s still a great day and a good recovery after a difficult qualifying session yesterday. This result helps our fourth position in the championship and continues my record of always scoring points in Singapore.”

What a night! Even though the luck was not in our side we got a very good 5th places. Let’s go for more! ? #Checo11 https://t.co/twNcOStVPC pic.twitter.com/naRKyIcU9z

Ocon said he was happy with tenth place after a very difficult weekend in Singapore. 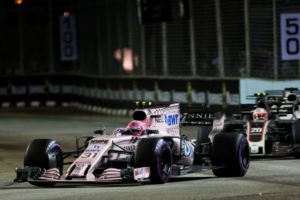 “It’s not the best way to celebrate my birthday”, pointed out the Frenchman, who turned 21 on race day

“I made a very good start, but I struggled on both the wet tyres and the intermediates. This wasn’t the case in Monza, where I was much more comfortable in the rain, but something wasn’t working and I don’t know why. This dragged me behind some slower cars. After the track had dried, I had good pace but I just couldn’t overtake the cars I was chasing. It’s just very difficult to find an overtaking opportunity here. It’s good to rescue a point in the end, but we wanted much more than that. We have to analyse what went wrong and come back stronger in Malaysia.”

“We started on the full wet tyres, which were the correct tyres for the early laps. But the rain eased off sooner than expected and the track came towards the cars on intermediates. We had to react quickly to the various safety car periods and the pit wall made the right calls to ensure we were always on the right tyres for the conditions. We lost out during the second safety car period, which cost both drivers track position – Esteban more so than Sergio. From there both drivers recovered ground, but it wasn’t easy to overtake. Sergio had a long battle with [Carlos] Sainz and Esteban was fighting with [Kevin] Magnussen and [Romain] Grosjean. Considering where we started the race, to come away with eleven points is a very satisfactory end to the weekend.”

Sainz: Austria is definitely one of the cooler places to go racing

Rossi will go to Aragón