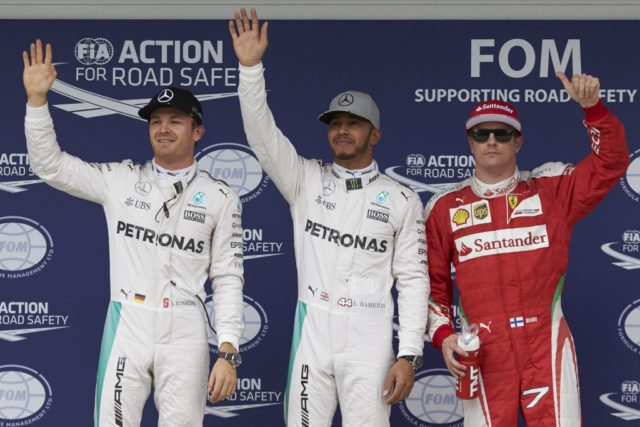 Lewis Hamilton beat his team-mate and championship leader Nico Rosberg to pole position for the Brazilian Grand Prix. Hamilton led Rosberg after the initial Q3 runs and then set a fastest time of 1:10.736 in his second attempt. He was over a tenth ahead of Nico.

Kimi Raikkonen finished third in a Ferrari, beating Max Verstappen of Red Bull. Sebastian Vettel in the other Ferrari settled for 5th, with Daniel Ricciardo behind him. Romain Grosjean was 7th in a Haas. He reached the Q3 for the 3rd time this year.

“I felt quite comfortable in qualifying, as I have been all through the weekend, commented Hamilton. –  Nico’s been getting quicker and quicker but I’ve generally had it covered throughout the weekend. It’s just remarkable when you think about what this team has done.

And what we’ve done with this team – to have that many pole positions incredible team work. This is the best I could have hoped for really coming into Brazil, it’s only my second pole here. It’s a track I’ve struggled at, so I’m really, really happy to be up at the front.”

“It was an exciting qualifying out there, for sure, Rosberg said. – It was very close, Lewis just was marginally quicker in the end. “My lap was good as well, just not quick enough. I was missing that little bit out there, but it’s OK.

“Anyway, as we’ve seen this year, pole isn’t always the guy who then wins the race, so I’m still optimistic for tomorrow, because of course I want to try to win the race tomorrow. I just look forward to tomorrow’s race, and whatever comes, comes. We have a great car in either condition, in the dry, and in the wet, so it’ll be exciting.”

HAM edges ROS in the battle for pole

Dani Sordo: The rally in Mexico will be fun, much faster than previously

Sébastien Ogier: Argentinean gravel is completely different to what we experienced in Mexico