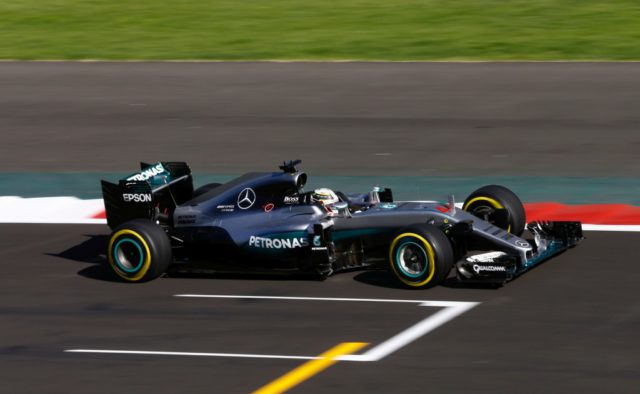 Lewis Hamilton in a Mercedes was fastest on both Friday practice sessions for the Brazilian Grand prix at Interlagos. The world champion set his best time in FP1 – 1:11.895 min. He beat Max Verstappen (Red Bull) with 0.096 sek. The championship leader Nico Rosberg finished 3rd, ahead of the other Red Bull driver Daniel Ricciardo.

Valtteri Bottas in a Williams was fifth, ahead of Sergio Pérez and Nico Hülkenberg in Force India. Felipe Massa with the second Williams cars was 8th. The Ferrari drivers spent the entire session running on the Medium compound. This left Sebastian Vettel ninth, and Kimi Räikkönen 10th. The German also spun at Mergulho.

Carlos Sainz Jr. and Daniil Kvyat followed in 11th and 12th places for Toro Rosso, the latter reacting well to catch his sliding car after suffering a rear-right puncture through Turn 5. McLaren-Honda held top 10 positions in the early stages, but ended up in 13th and 14th for Button and Alonso.

In the second practice Hamilton set 1:12.271 min and was only 0.030 sek ahead of Rosberg. Third and forth were both Williams drivers Bottas and Massa, followed by the two Red Bulls and the two Ferraris.

“It’s been a good day, commented Hamilton. – We got through all of our run programs and the car is feeling really good. It’s pretty tough out here physically right now with the heat as high as it is. Not just in the car but for the guys in the garage too. Finding the right balance isn’t easy either in these conditions as the tyres are getting really hot. But our long run pace seems to be strong so we can be happy with the start we’ve made today.”

“It’s been very hot out there today – more so than we expect it to be for the rest of the weekend, Rosberg added. – As a result, that makes it difficult to fully prepare for qualifying and the race. Other than that, it was a pretty normal Friday. Our car looks quick but Red Bull are definitely close. The Soft tyre is degrading quite a lot on the long runs, with blistering on the rears. There’s a surprising amount of degradation on the Medium tyre too.”

“The long run today, I didn’t feel we were strong towards the end of it”. But once track cools it will be completely different, said Ricciardo. Of course we will try to improve what we could have done today. I think the rain will be nice. It will be fun to change it up a bit. If it is a cooler as well tomorrow and Sunday it should be better for the tyres.

Citroen did not hit the team’s targets in Portugal, still looking for the right...

Ferrari in art – The Sporting Legacy

Kubica: I have a lot of things to discover but I am looking forward...