Hockenheimring will host the eleventh race of the 2018 Formula1 World Championship season. After taking a year off, F1 returns to Baden-Württemberg, the circuit that has already hosted 35 German GP races.

However, the track in use since 2002 is very different from the original used by the Formula1 single-seaters since 1970, given that chicanes were added and modified throughout the years.

Yet, the current layout still includes the Motodrom section featuring every type of turn possible

The Spitzkehre hairpin turn (turn 6), fast corners (turn 7) are taken at full-throttle and other corners where brake use is at mid-level.

Hockenheimring is a track that puts the power-units to the test, but the brakes benefit from long straightaways that help them cool down after the intense work in the first two-thirds of the circuit.

But if it rains, the opposite problem could occur where the carbon braking system (discs and pads) doesn’t reach its optimal operating temperature. In this case, the drivers don’t have all of the friction they need to brake.

According to Brembo technicians who have classified the 21 World Champion tracks, Hockenheimring falls into the category of circuits that present a high-level of difficulty on the brakes. 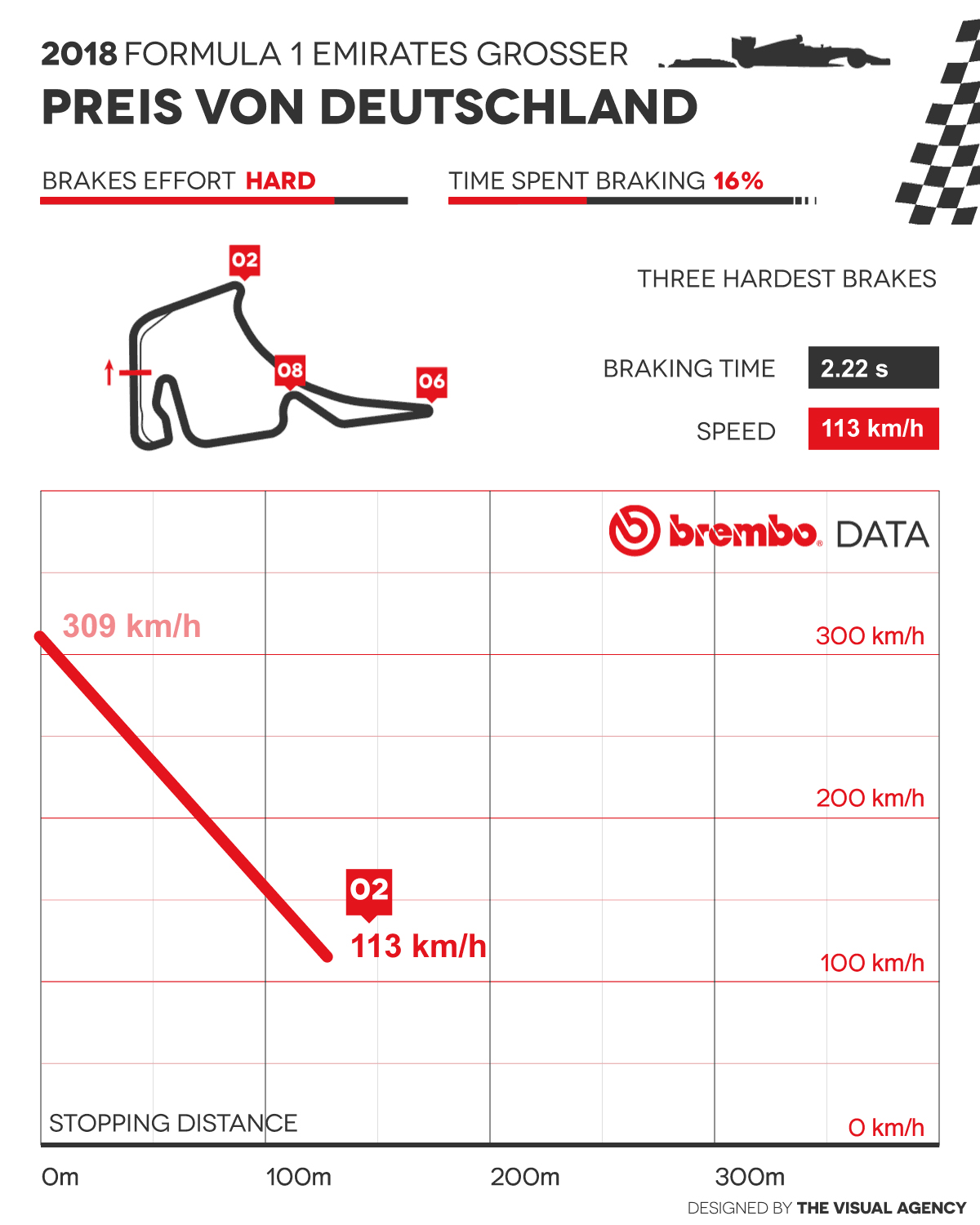 On average, the Formula1 drivers use their brakes on a single lap for just over 11 seconds, a value that is half a second lower than that of the Canadian GP. However, the German track is longer by 250m than the track in Montreal and the cars’ average lap speed is faster.

The braking systems are in use for 16% of the race. That is the exact same percentage registered at the French GP, the Russian GP, and the Japanese GP. But these races are very different in terms of the number and intensity of braking.

The average peak deceleration is 3.9 G overall, despite the first four braking sections never going below 4 G. From the start of the race to the checkered flag, the amount of energy dissipated by each single-seater is over 220 kWh. Summing up the load applied to the brake pedal from the start to the finish, each driver experiences a force of 53 tons. 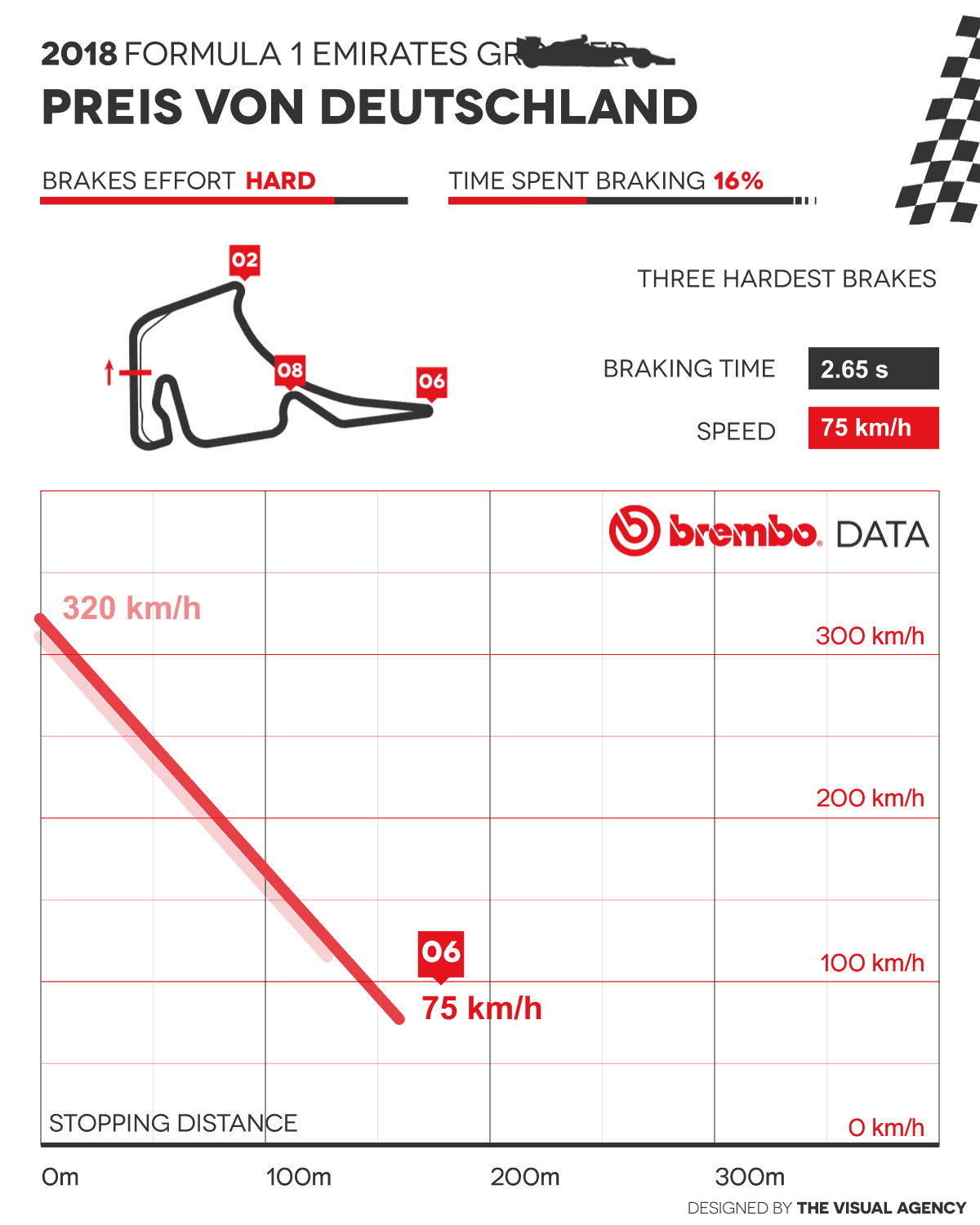 Less than half of the 17 turns on Hockenheimring require brake use. Five are classified as demanding on the brakes, one is medium and another is light.

The most challenging braking section is at turn 2. The cars slow down from 309 km/h to 113 km/h in a mere 2.22 seconds. The drivers are subjected to a deceleration of 4.4 G as they apply a load measuring 133 kg on the brake pedal and travel 128 meters.

The drop in speed is even more decided at turn 6. From 320 km/h to 75 km/h in just 2.65 seconds, which translated into very hard braking. The deceleration is slightly lower (4.3 G) at this turn, but the load on the brake pedal reaches 134 kg. These characteristics make this turn one of the favourites for any driver looking to pass a competitor. 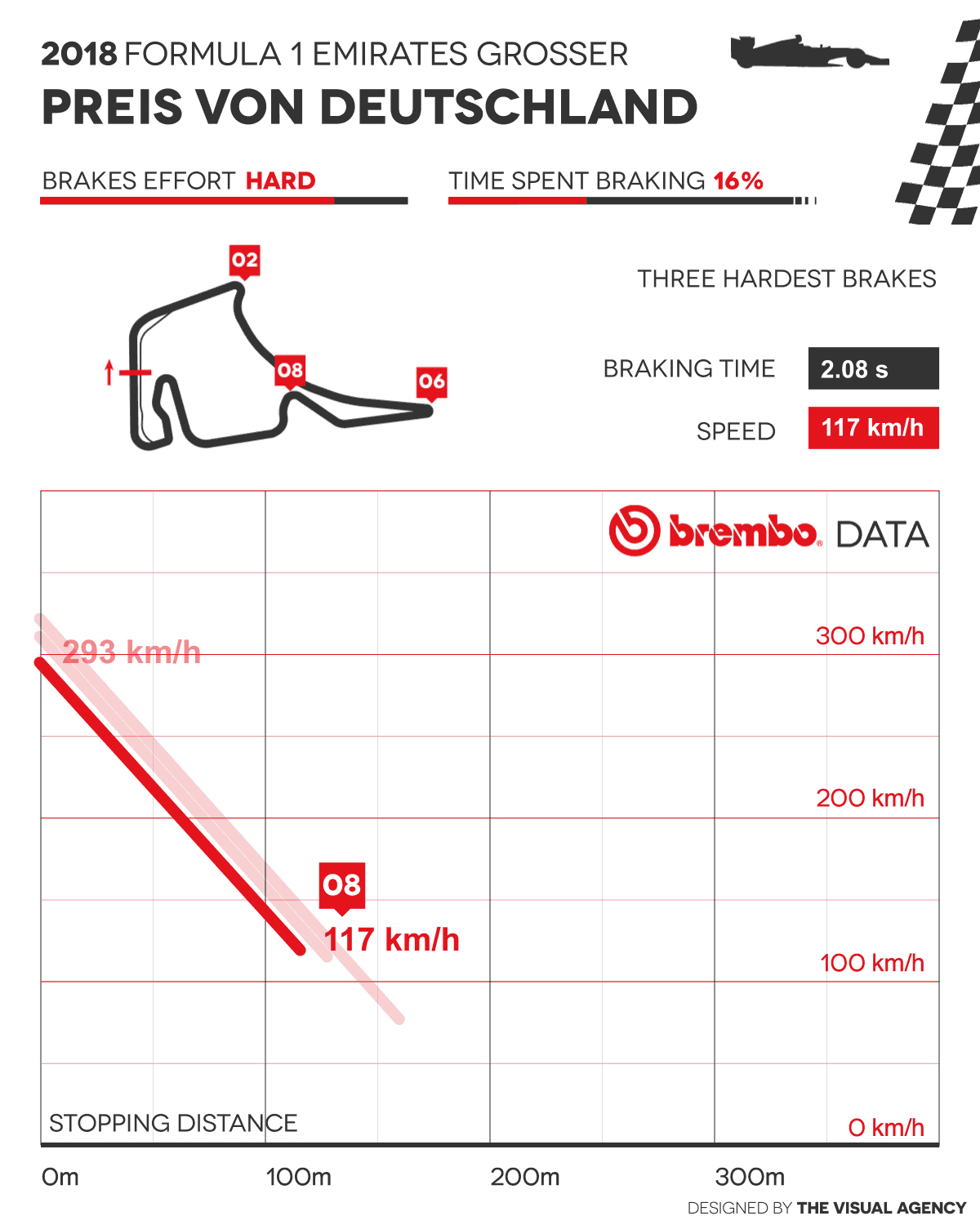 Cars with Brembo brakes have won 20 editions of the German GP. Five teams have won here at least once, including Ferrari in 1977 with Niki Lauda. This was the first Ferrari victory with Brembo brakes, it then went on to win 11 other races. Only one of these victories by the single-seaters from Maranello took place at Nürburgring. Michael Schumacher on the other hand, won four times on this track, every single time with Brembo brakes.

MOST F1 WINS AT HOCKENHEIM

Brembo brakes for the 2019 MotoGP season: all the trends

Fernando Alonso: The thing I love most about Monza is the fans