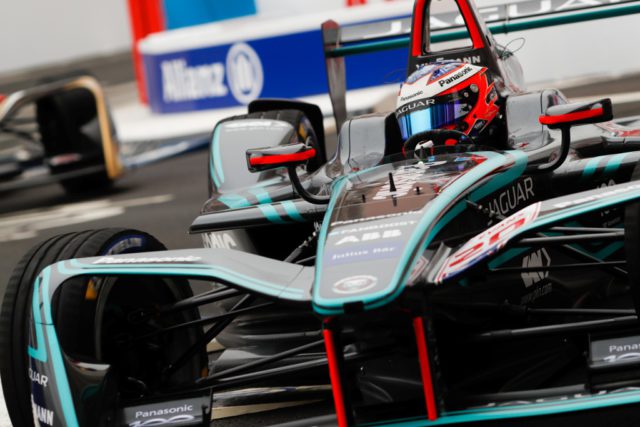 Panasonic Jaguar Racing was once again at the heart of the action in the latest round of the ABB FIA Formula E Championship – in Rome – as the team’s record of scoring points in each round of the 2017/18 season continued. In a season of firsts, Mitch Evans delivered the team’s highest ever starting position of third place with team-mate Nelson Piquet starting 13th on the grid. Both of them made solid starts and managed the energy of their Jaguar’s efficiently.

As the halfway point of the race approached, Piquet pitted first for the team, but encountered difficulties with his seatbelts as he pulled away from the garage, he retired shortly after.

Following a successful car change on lap 16, Evans was in the midst of a nail-biting battle for a podium and possible win. While running as high as second, the Kiwi driver was battling hard with Sam Bird for the win. On lap 29 Mitch attacked into turn 9 but the Virgin driver defended the inside and he lost momentum depleting his energy reserves. He eventually crossed the line in ninth.

Win or bust. We came, we saw and we battled. We walk away with points and we will be stronger in Paris. P9 for Mitch and DNF for Nelson. #JaguarElectrifies #RomeEPrix pic.twitter.com/okWVgmgqEA

“Qualifying was good but I’m gutted as we had a chance to win. Coming away with points for the team is positive but we could have had a lot more which is hard to take. I had my eyes on the prize but well done to Sam. Hopefully, we can be fighting for a podium in Paris”, Evans commented.

Piquet added: “The day started off well with the fastest time in FP1. We tried to do something different in qualifying which unfortunately didn’t work out. I was confident in the race as we know we have pace and efficiency but it wasn’t our day. I had a seat belt issue in the pit lane so I had to stop to put them back on which took too much time. Mitch had a great race but we can learn as a team from this one. Rome was an amazing event, the track was cool and the fans were passionate.”