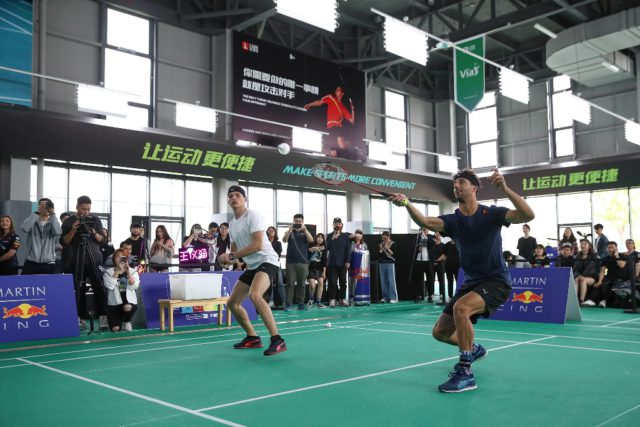 Formula 1 drivers are famed for their razor-sharp reactions and hand-eye coordination. After all, both attributes come in handy when you’re trying to finely judge a braking point at 200mph, while simultaneously changing engine modes and adjusting the energy recovery settings on your car.

But just how finely honed are those skills? Well, this week we decided to see just how sharp our drivers really are, and as we’re in China, we figured we’d challenge them to a real local test of reaction time – badminton.

The racquet sport is pretty much a national pastime in China, with an estimate 100 million people playing regularly, and at the top level, the country has long dominated the sport. And at the tippy top of the topmost in China is Wang Yihan.

The Chinese ace is an eight-time world champion and held the number one spot in the women’s ranking for a staggering 116 weeks straight, so there could be no better tutor (or tougher adversary) for Max Verstappen and Daniel Ricciardo in our Shanghai shuttlecock challenge at the city’s Lark Sports Centre.

Swapping the cockpit for some shuttlecocks ? The Bulls put the ‘Bad’ into Badminton ? #ChineseGP ?? pic.twitter.com/f5Nj839rfd

After a warm-up and practice session, during which the boys picked up some good racquet techniques, they were set to take their first test – the Goal Challenge.

Each driver selected two fans from the audience who’d been invited along to see the drivers in action and then Max and Daniel took it in turns to act as a goalkeeper, attempting to deflect as many shots as possible from the opposing team. 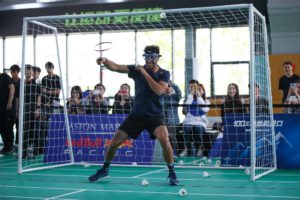 And at the end of a veritable blizzard of shuttlecocks, Daniel’s emerged victorious

After that, it was a test of power, with each driver attempting to deliver the fastest smash. With a top recorded speed of 359km/h, the boys were never going to challenge Wang Yihan, and she duly set them a sky-high target of almost 320 km/h. Neither driver could match it but once again Daniel came out on top in the battle of the bulls.

After that, it was time to get down to some proper matchplay, with the drivers first pairing up to try to beat Wang. The first side to seven points would win, and though it was close, the eight-time champion again won the day. Next, the drivers played a doubles match with a player from Tong Ji University and in the driver contest, Daniel’s made it three from three as his team won out.

The final challenge, and definitely the most fun from a spectator’s point of view, was the Catch test. This one saw racquets swapped for bamboo baskets, one of which was strapped to each driver’s back. The challenge was to run around catching as many shuttlecocks as possible in a minute, as a hailstorm of feathered targets rained down on them courtesy of the other players.

On the back foot after three less than glorious rounds, Max went hell for leather and while the results weren’t exactly elegant, they were hilarious. 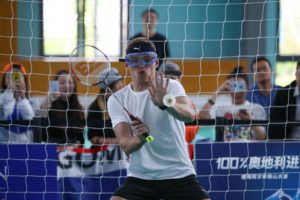 Ultimately, though, Daniel Ricciardo, a boy raised in the sunny climate of Perth, where racquet sports are a way of life, was just a bit better at badminton than Max

The 20-year-old hails from western Europe, where the way of life is to generally stare out the window and moan about the rain.

Max though was magnanimous in defeat. “It was a lot of fun. I haven’t played for a long time, but coming off a plane, I think it was really good exercise. I was good at the catching at the end though!”

As for Daniel, he admitted that he might have had an advantage. “Yeah, I played a little at school. We played for about two months. We had this little competition at school. But I grew up playing a bit of tennis, racquet sport, so I like it.”

And his verdict on his rival?

“He was terrible, I was great.”

“She was also terrible and I was great. No, really, she was really good. I liked the warm-up routine she did. I like the smashes, the overhead shots were fun, so sweaty armpits, all good!”

The last part of the boys’ trip to the sports centre was to hang out with the fans that had turned out to see them and to take questions from local media. And as with the rest of the day’s activities, they totally smashed it.

Crutchlow: We got lucky at Misano but I don’t really care because we did...

Steiner: Haas will try to better its position in the championship from last year