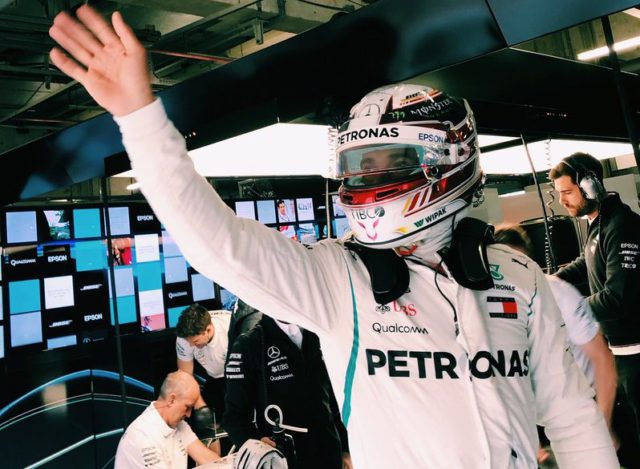 Just a tenth of a second covered Mercedes and Ferrari in second practice in Shanghai, so it’s little wonder Silver Arrows duo Lewis Hamilton and team mate Valtteri Bottas are expecting another closely fought battle with the Prancing Horse this weekend.

Having been beaten by their great rivals in the first two races, Mercedes – undefeated in China  since 2014 –  looked back to their best in FP1 as Hamilton topped the times by 0.359s on the medium tyres from Ferrari’s Kimi Raikkonen, who ran the quicker ultrasofts.

But the picture looked different after second practice, with Raikkonen closing to 0.007s off Hamilton’s leading pace, with Bottas 0.033s off the pace and Vettel 0.108s slower.

“It has been a good day,” said Hamilton, a winner in Shanghai on five occasions. “We got through all the laps that we needed. We’ve got some good feedback about the car. We’ve been progressing through the sessions and we’ve got a good idea.

“It’s quite straightforward here. I mean all the tyres are quite similar in pace. So there’s not a big, big difference between them even though we have the double step for the ultrasoft.

“Ferrari are still quite quick. Red Bull were really quick on the long run. But, it’s good to see all the times so close.”

Bottas, who struggled with the balance in first practice but made progress in the afternoon, echoed his team mate’s view.

“I think Ferrari [will be our biggest rival],” he said. “It seemed extremely close again with them. So, I think tomorrow is going to be a close qualifying and then Sunday as well. The balance was a lot better in practice two. Practice one we had a lot of issues. The car, even though it was quick, it wasn’t easy to drive at all.

“We got it better for practice two and that way lap times were improving. Hopefully we can make another step for tomorrow.”

Mercedes trackside engineering director Andrew Shovlin said the team were unsure how they would perform on the softest of the three compounds, but data from practice was encouraging.

“Free practice two saw us running all three tyres, both using ultra soft but splitting the harder tyres so that Valtteri could focus on the medium and Lewis on the soft,” he said.

We had concerns over the ultrasoft coming into this event but it was surprisingly consistent over the long runs and still going strong when we boxed both cars having seen the rain approaching on the radar.”

Lewis: Sebastian’s move was no surprise