Hyundai Motorsport revisits the scene of one of its most confident victories next week as the FIA World Rally Championship (WRC) moves to Corsica for the fourth round of the 2018 season.

Tour de Corse offers teams and crews the first proper tarmac challenge of the year after the wintry conditions faced in Monte-Carlo and Sweden, and the hot gravel stages of Rally Mexico.

Twelve months ago, Thierry Neuville and Nicolas Gilsoul took Hyundai Motorsport’s first victory of the season in Corsica, winning by a margin of 55 seconds

Dani Sordo was also on the podium in third place. The team will be hoping to defend its honours in this year’s event, as it aims to consolidate its lead in the manufacturers’ championship.

Hyundai Motorsport will field the same three-crew line-up for Tour de Corse as competed in Mexico earlier this month. Andreas Mikkelsen will drive the #4 Hyundai i20 Coupe WRC alongside compatriot co-driver Anders Jæger. Neuville and Gilsoul will aim for their second win of the season while Sordo and Carlos del Barrio will look to build on their Mexican podium.

All crews have prepared for Corsica during a three-day test on the island, establishing baseline settings for the cars ahead of the 12-stage rally, which gets underway with shakedown on Thursday. The test was interrupted shortly before its scheduled completion on Wednesday afternoon when Neuville and Gilsoul went off, the crew unharmed. 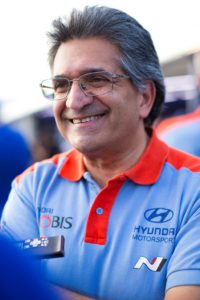 As it currently stands, Hyundai Motorsport holds a 12-point advantage in the overall classification but with just 17 points separating all four manufacturers, the battle for the top positions could not be closer.

Team Principal Michel Nandan commented: “We have only a 12-point advantage in the manufacturers’ championship and we are under no illusions: Tour de Corse will be another tough and close battle. The fight for the Championship is tighter than ever this year and we’ve seen how quickly things can turn around. We have good memories of Corsica from our win and double podium last year, so that’s the sort of result we’d like to repeat. Our ultimate goal is to consolidate our lead in the championship, but we know the opposition will have other ideas.” 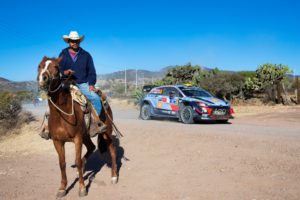 Mikkelsen and Jæger are seeking their second podium of the season

“Corsica is a very special event and our first true tarmac rally of the season. As a crew, you never really get any break during the stages; it’s a continuous corner-to-corner challenge that requires utmost concentration. It’s equally tough on the car as it is for the driver and co-driver. It is easy for the brakes to get warm so we have to adapt our driving style to save them for the really long stages. Tour de Corse is a beautiful rally and one I really enjoy”, Mikkelsen said. 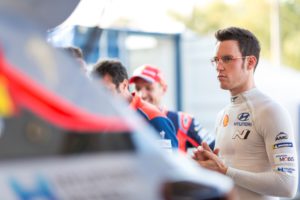 “Tour de Corse is one of my personal highlights of the season. We have some good memories from this rally across the years; we have won twice, including last year’s WRC victory. So I am hoping for another competitive weekend. We had an accident towards the end of the pre-event test but that won’t change our approach to this rally. We know it will be a close contest again, as there are many quick drivers. The long stages that are a particular characteristic of Corsica mean we have to keep focused at all times. It is a really demanding event for crews and teams. But we’re determined to strengthen our position in both championships”, Neuville explained.

Throwback Thursday and the amazing feeling of the victory ? ??. Our win in @TourdeCorseWRC 2017 was one of the highlight of our season! What about this year? #TBT #Victory #BestMemories #HungryForMore #HMSGOfficial #WRC pic.twitter.com/s09EuMsHEb 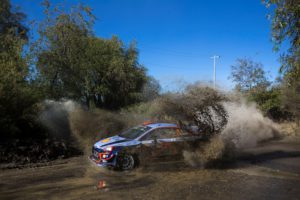 “I was pleased with our result in Mexico and I hope we can continue with this level of performance as we move onto the tarmac challenge of Tour de Corse”, he said. “It is a rally I always enjoy, and which requires a very specific approach. With long stages held in the mountains, Corsica really is a classic tarmac event. It’s corner after corner, so we are always turning the steering wheel during the stages, which makes it a very physical event. Precise pace notes are crucial for a good performance. I can’t wait to get started!”

We can confirm that @thierryneuville and @nicolasgilsoul went off the road during the final afternoon of our three-day #TourdeCorse test today. The crew are OK. #HMSGOfficial #WRC

Hyundai Motorsport confirms that Thierry Neuville and Nicolas Gilsoul are OK after their crash into a river in Corsica. ??????#WRC #TourdeCorse pic.twitter.com/egYik9pBGR

Hamilton with an unexpected victory in Singapore