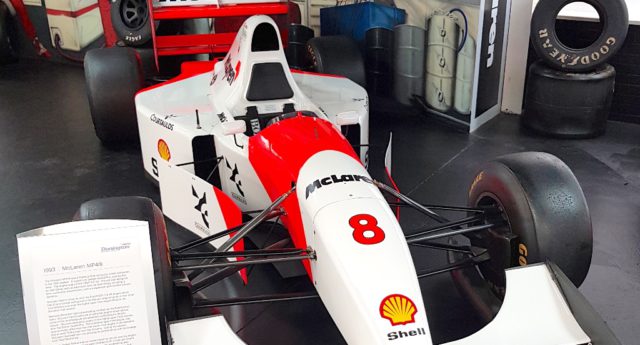 One of the most memorable events in the history of Donington Park, the rain-soaked 1993 European Grand Prix, will be celebrated at this year’s Donington Historic Festival (May 4, 5 and 6). There will be on-track F1 car demonstrations on the Saturday and Sunday of the event, plus static displays on all three days.

The 25th-anniversary activities add a further exciting dimension to the event. Visitors will enjoy three days of world-class historic motorsport. The Festival will have an outstanding line-up of grids featuring an incredibly diverse range of racing machines spanning nine decades.

The Festival’s anniversary theme celebrates that unforgettable day in April 1993 when the crowds flocked to Donington Park as the circuit played host to its first Grand prix in 55 years. Torrential rain made the track treacherous. Starting from 4th position, Ayrton Senna battled it out with Alain Prost, Damon Hill and Michael Schumacher to win by an incredible 80 seconds.

The F1 cars on show pay tribute in particular to Ayrton Senna. He either drove them or was battling against them during his career up to 1993. They include:

The Donington Historic Festival will celebrate the 1993 European Grand Prix

Online tickets offer great discounts over buying on the gate. Prices start at £10 for the Friday practice and qualifying day (£15 on the gate). Entrance for children under 13 is free and there are tickets with discounts for teenagers (age 13-15). Car parking is free. And owners of pre-1990 classics who are not attending with one of the registered clubs can request a free infield display parking pass when they book their tickets.

Suninen can’t wait to get started