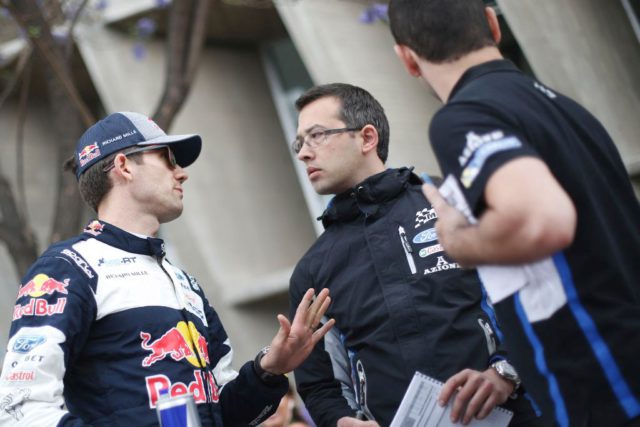 Italian Massimo Carriero has formed an integral part of the M-Sport team for the past six years. Heavily involved in the design and development of the new-generation, Ecoboost-powered Ford Fiesta WRC, Carriero attends all FIA World Rally Championship events and tests but took time out of his busy schedule as Head of Event Engineering to tell the M-Sport press office a little more about his role within the team.

How long have you been with M-Sport and what made you join the company?

I’ve been with M-Sport for six years now. I’m passionate about motorsport and I’ve always wanted to be involved in the industry. I was primarily interested in circuit racing but when I started engineering for a national rally team in Italy I developed a real passion for rallying. The goal was always to improve myself and my skills, and that’s why I decided to join M-Sport and became involved in the FIA World Rally Championship.

What does your role as M-Sport’s Head of Event Engineering involve?

On events, I get together with the guys that are running the individual cars to coordinate our approach to the rally. We share information about the car builds and test results which allow us to formulate our event strategies and put into place any safeguards which may have arisen. We look at tire strategies and weather reports and anything that involves the on-going process of the event.

You participated in the design and development of the Ford Fiesta WRC, what was your key role in the process?

During the car design process, I was the technical leader of the project. I started with the car concept and then followed the process through to the vehicle design and engineering. Once we had the first car on the ground, I followed the testing and development program which brought us to Rallye Monte Carlo.

Since then, the work has not stopped. My main role may be ensuring that we extract the most from each event, but the development never stops. My main focus is on the events, but I still attend every test and work with the team to ensure that we are always extracting the maximum performance.

What are your thoughts on the performance of the Ford Fiesta WRC through the first half of the season?

It’s been a very positive start to the season for us, but it’s never easy. If you look at the standings we have more than a 20 point lead at the head of both championships – that’s a good lead, but if something happens it’s never enough. Even if things are going well as they are now, you can never relax and you need to keep the momentum going.

What are your thoughts ahead of Rally Italia Sardegna?

On a personal level, I really enjoy this event. There are always people around the service park who I know and who I can catch up with. The weather is nice, the people are nice, and it’s great to have a little taste of home in what is a very busy year for all of us. But in terms of the event itself, it’s no different. No matter where we are the goal is always the same – and that is to do the best we can and challenge for the victory.

Good morning from @Rally_d_Italia ☀️ It’s Shakedown day and the crews are on their way ?? #WRC #RallyItalia pic.twitter.com/OkUmnSBfvR

I can’t remember the last time the WRC competition was this close, Wilson says

Lorenzo quickest on Day 1 at Catalunya

Sebastian surprised by the big gap with Mercedes