DG Sport Compétition has made two key signings as the excitement grows ahead of the WTCR – FIA World Touring Car Cup presented by OSCARO season opener in Morocco from 7-8 April. 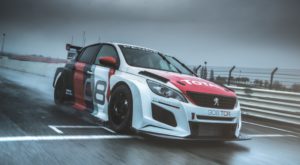 Aurélien Comte will bring his title-winning pedigree and an abundance of knowledge of the Peugeot 308 TCR – accumulated in his role as the car’s development driver – to the Belgian squad, which has also acquired the expertise and experience of Eric Nève as Team Manager. DG Sport Compétition will enter a second 308 TCR. The announcement of the second driver will come in due time.

“Having been involved in the major strategic decisions and regulations, quite simply I’ve missed the track,” said Nève. “Now I have this opportunity thanks to DG Sport Compétition I will be out to offer them a maximum amount of assistance. Back in 2005 [Chevrolet was] the baby brother in WTCC; our cars struggled against their rivals and our organisation was not beyond reproach. However, this did not prevent us later from clinching three consecutive world titles. I cannot claim that DG Sport Compétition will follow the same course but I do know the team’s qualities created by Christian Jupsin and Alain Georges, and I know what I can bring to them thanks to my experience.”

Comte, 29, said: “Having been involved in the development of the Peugeot 308 Racing Cup and then the 308 TCR, I confirm the 308TCR boasts enormous progress in all fields and I’m confident the 308 TCR is well-born and will give its rivals the run-around. I never missed a televised broadcast of the WTCC. And now I will be confronting guys on the track that gave me a buzz, that I thought were inaccessible. And that’s brilliant. I’m fully aware that the level will be extremely high and that I will be discovering most of the circuits, but this does not scare me; I know the 308 TCR and I can count on a team that’s efficient, professional and full of enthusiasm.”

François Ribeiro, Head of Eurosport Events, the WTCR promoter, said: “I’m really pleased DG Sport Compétition can count on Aurélien’s knowledge of the 308TCR and talent and Eric’s valuable expertise. Eric played a key role in Chevrolet/RML’s success in WTCC, so I’m certain he will be a good asset to DG Sport. We wish him and Aurélien well.”

Testing is over! ?? See you tomorrow #WTCR #zandvoort pic.twitter.com/Mr0f0A4E4G

Albon: Your mind can’t really understand how quick it is until you actually drive...