15 drivers will fight in the 2018 FIA World Rallycross Championship presented. The permanent competitors, who will be joined by up to ten round-by-round drivers at each World RX event, comprise six Teams and three Individual entries. Cars from six different manufacturers feature. GRX Taneco Team field a pair of Hyundai i20s and GC Kompetition lines up for its debut season with the new Renault Megane RS.

2014 and 2015 title winner Petter Solberg once more joins the Swede who will defend the title.

Mattias Ekstrom, 2016 World Champion, returns to challenge for another title with EKS Audi Sport. Previously he dovetailed his rallycross efforts with commitments in the DTM. Now Ekstrom will focus solely on World RX in 2018. His teammate is Norwegian Andreas Bakkerud. The six-time World RX event winner races an Audi for the first time this year.

Stepping-up its involvement after running an Individual entry last year, GRX Taneco Team introduces Hyundai to the World Rallycross Championship with a pair of i20s for Finn Niclas Gronholm and Russian Timur Timerzyanov.

2014 Team Champions Olsbergs MSE returns to the championship after a year away. It will run a pair of new Ford Fiestas. Its line up is all-Swedish and consists of Kevin Eriksson and Robin Larsson.

The three Individual entries will compete for the drivers’ title but do not claim team points. Building on selected outings in 2017, Belgian Gregoire Demoustier lines up for a full season. He will drive a new Peugeot 208 run by Sebastien Loeb Racing. Team Peugeot Total has an Individual entry for former European Champion Kevin Hansen while Team Stard will provide a new Ford Fiesta for Latvian Janis Baumanis.

Testing complete here at Loheac ☑️
We’ve managed to get a lot of work done, and make some real progress as we get nearer to the season! pic.twitter.com/9r3c31Dm5c 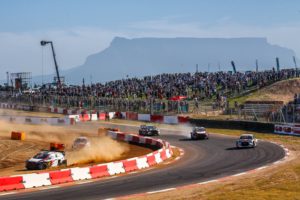 “PSRX Volkswagen Sweden proved formidable with Johan Kristoffersson in 2017. But they are sure to face a huge challenge from their rivals this year, not least EKS Audi Sport, Team Peugeot Total and Oslbergs MSE. Then, of course, there are the exciting additions from GC Kompetition’s Renaults and the new Hyundais from GRX Taneco Team, all of which give this year’s field immense variety.

“With new events for 2018, a rapidly growing support base and increasing involvement from manufacturers, World RX is surely set for another memorable season.”

The 2018 FIA World Rallycross Championship comprises 12 events this season. These include the series’ first visit to Silverstone for the World RX of Britain as part of the Speedmachine festival. The championship will also go for the first time to Circuit of the Americas in Austin.

The season begins with World RX of Catalunya Barcelona Spain on April 14-15.

Things are going well here in testing despite the wet – trying new things out and making all these small improvements as we go ??? @FIAWorldRX pic.twitter.com/DhULY1imfO

Hulkenberg: Once you’re in the car and watching the lights, it’s business as usual

Stoffel Vandoorne at McLaren for 2017, Button with a new contract