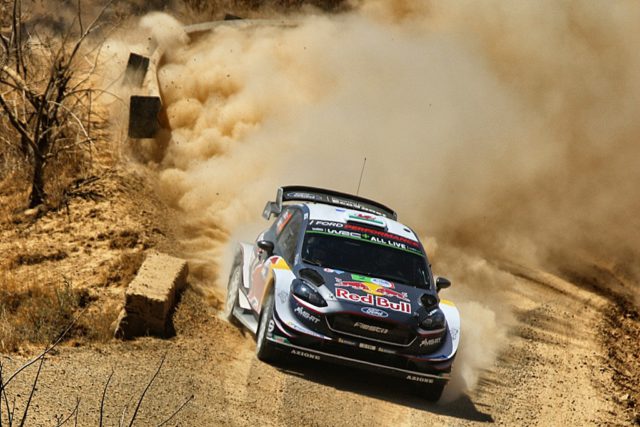 Elfyn Evans and Daniel Barritt had a crash during Rally Mexico after a strong start of the race. The M-Sport was 15 seconds adrift of the lead after the third speed test when they were caught out by a series of compressions. Thrown sideways, they lost the rear and rolled their Fiesta.

The pairing checked in with the medical team on their return to service where Barritt was advised not to continue. Both driver and co-driver are okay, but safety remains paramount and the decision was taken to ensure they get the necessary rest before the next event.

“We hit a series of bumps that were a lot worse than expected. We lost the rear – still in sixth gear. And we didn’t have the power to pull out of the slide. We clipped the bank on the inside and rolled I don’t know how many times”, Evans explained.

“I jumped out of the car immediately because I didn’t think there would be any way to continue. But when the dust settled we could see that the damage wasn’t too bad at all. We got our helmets back on and managed to finish the stage – which is incredible after a roll like that.”

“We checked in with the medical team when we returned to service and Dan was advised to go for some further precautionary checks. We’re both okay, which is the main thing, and now we just need to focus on starting our season afresh in Corsica.”

ℹ️ Unfortunately @ElfynEvans and @danielbarritt will not restart this afternoon. Both driver and co-driver are okay, but having checked in with the medical team it was advised that they go no further today. #WRC #RallyMexico #FordPerformance

Meanwhile, Sébastien Ogier was trying to overcome the disadvantage of a difficult road position

“We tried to push as hard as possible today but had a small spin which cost us maybe six or seven seconds but, being second on the road, I think we can still be happy with our day. We made the best of it and were beating everyone around us. But for sure the guys starting further back were faster – as we expected”, he said.

“Saturday won’t be much better as we’ll still start very early on the road. It’s going to be difficult to catch the guys in front but you never know and we’ll try our best.”

Vettel: I promise to push next year