Dani Sordo leads the overall classification of Rally Mexico after the first leg of the event while his Hyundai teammates Andreas Mikkelsen and Thierry Neuville were sixth and seventh. The Spaniard’s advantage is 7.2sec in front Sebastien Loeb.

For Sordo, making his second WRC appearance of 2018, the first run through El Chocolate delivered a sweet result with his first stage win of the season, a feat he immediately followed up in the subsequent Ortega stage. A mixed tyre choice in afternoon loop proved a risky strategy but they defended their position.

“I have been happy with our pace and rhythm today, particularly on the morning loop when we could really set some good times, making the most of our road position”, Sordo said

“To be leading the rally at the end of the opening day is a great feeling but we know it is very close and we will have a fight on our hands tomorrow. I have to say thanks to the whole team for their hard work. They have given us the perfect car. The stage wins on Friday morning were very nice but we knew the repeat loop would be tricky. We thought the soft tyres might be a bit on the limit but it was a risk that did not really pay off; we didn’t generate enough lateral grip. We have been quick in Mexico before so we hoped to be in the fight, and we will do all we can to remain in the podium battle.”

?? SS8 #Sordo
⏱ 9:31.8 (+7.0)
“I think we make a small mistake with the tyres today. We were struggling all the time. The traction was okay but the lateral grip was nothing. We took a risk, it’s like this.” #WRC #HMSGOfficial #RallyMexico pic.twitter.com/oRdVKUitDO 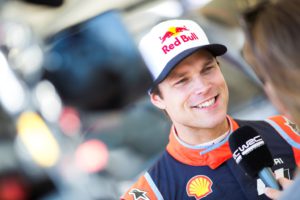 Mikkelsen made a steady start and is fighting Ogier for fifth

“We have tried to push as hard as we could in the circumstances. I’ve been happy enough overall, but we know there is room for improvement. In the morning loop, our focus was on getting to grips with the car, and how to control it on the dusty mountain stages. In the afternoon, we opted for harder compound tyres, which felt very slippery at times. It was difficult to know where to push, and how hard because you lose the line so easily. There were a few mistakes here and there but generally, it’s been a solid first day. We’re involved in a close battle for the top five, which gives us something to build on”, the Norwegian explained.

As the first gravel event of the season, road position played a key role with an increasingly clear driving line emerging on the dusty stages benefitting the later runners. 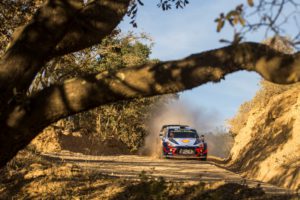 As championship leader, following his win in Sweden, the honour of being first on the road went to Neuville

The Belgian did all to minimise the time loss but, in SS5, unforeseen over-consumption of fuel in his car and the high temperature resulted in a drop in fuel pressure and an ultimate loss of position before mid-day service. He then experienced power steering issues in the afternoon, further hampering his progress.

“Not the most positive day for us”, Neuville admitted. “Our motivation level was quite high even if we knew it would be difficult as first on the road. We did our best not to lose too much time in the morning loop. Before the start of the short SS5, we were in seventh overall. Unfortunately, we had an unforeseen over-consumption of fuel, which caused a loss of fuel pressure in the stage. We lost around 20 seconds and two positions. It was really disappointing. “The afternoon didn’t really improve and we struggled again in SS8 (Ortega 2) with some power steering trouble losing another 40 seconds of time.”

Hayden Paddon is determined that Corsica will be the real start of his 2017...