6 wins make Sébastien Loeb a real specialist about the way you can triumph at Rally Mexico. The legendary 9-time world rally champion is appearing this week at the race – his first participation of three planned in WRC in 2018. The event is the third round of the 2018 championship.

“This is a rally that I have always loved, so I have high hopes I will enjoy these stages in the C3 WRC, which is an exciting car to drive”, Loeb said. “Other than that, I have the same uncertainties as everyone else: although I hope to be more or less on the pace, I have no idea where I stand in relation to the other drivers, so I can’t wait to get started! You have to bear in mind that this is still the world championship! The other drivers haven’t stood still over the last few years…”

“In any case, I’m pleased with the testing we did. I covered almost 500 kilometres in two days. I found the C3 WRC well balanced. And I felt that it had improved again since my last test outing at the end of 2017. I have tried to give myself every chance by spending some time in a DS3 WRC beforehand to get the feeling and my reflexes back, and by watching some onboard video footage from previous rallies.” 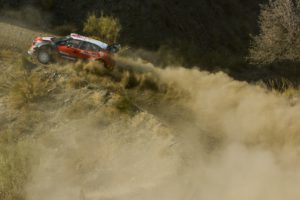 “But that’s pretty positive because it is one of the events I still know best. However, my memories of the 72% that I have driven before go back six years, so I’ve done a little bit of work so that I don’t feel completely disorientated. I hope my position in Friday’s running order (11th) will help me to get my bearings because with the current regulations, you really need to have a good first day, otherwise your rally suffers.”

He won the rally last year although in a bit of a strange way.

“Mexico is a bit like Catalonia, one of the gravel rallies where we were pretty competitive last year. Since then, we have made further improvements to the C3 WRC. So I have high hopes that we can get among the frontrunners”, Meeke commented.

“Of course, a lot of our rivals had reliability issues related to the altitude last year and are bound to be a lot better prepared this time around. It’s definitely an event that I like: as the full power of the cars is not available, you have to be as clean as possible in your driving. I’m also pretty pleased with our recent tests. We seem to have made more progress, especially on the dampers in conjunction with Öhlins. That was Sébastien’s impression too. In any case, I’m really looking forward to it. We need to make the most of running seventh on the road on day one – that will be key in getting a good result.”

“We know the specifics of this rally very well and claimed the C3 WRC’s first ever win here. However, we also know perfectly well that the season’s opening round on gravel is unusual, mainly due to the altitude, and that can shake things up completely. Kris is comfortable here, as he showed in 2017. And he will be in a good position to record another strong result. Lastly, I’m delighted to see Sébastien and Daniel [Elena] back with the team. Although they are bound to lack momentum compared with the competition, they continue to show the same professionalism and determination as when they first started out and will hope to do well here”, he added.

It seems that we have a special guest for our media fonction!#WRC #C3WRC #Comeback #Legend pic.twitter.com/6NJZIT53Yn

Renault takes fifth in wet and dry thriller at Hockenheim

Ingrassia suggested to their engineer to light a candle for him and Ogier before...