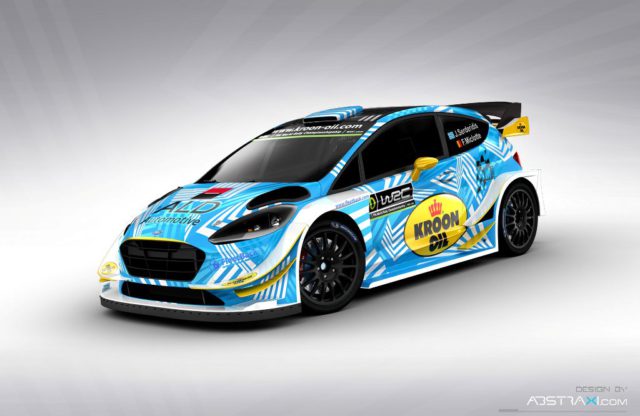 Jourdan Serderidis will take the wheel of Ford Fiesta WRC for two rounds of this year’s WRC. The Greek driver will compete at Rallye Deutschland in August, and again at Rally Australia in November. Serderidis had 10 points with a Citroen DS3 R5 in WRC2 in 2016 while last season he won the WRC Trophy.

Serderidis made his World Rally Championship debut at the 2013 edition of Wales Rally GB. Since then he has become a regular face on the world stage.

Having made his debut with the Ford Fiesta R5, he and co-driver Frédéric Miclotte contested three seasons as part of the championship’s premier support series. After that, they progressed to become the 2017 WRC Trophy Champions.

Following the huge success of the new-generation world rally cars, the pairing are now eager to experience the very highest level of competition for themselves.

“I am extremely pleased to be back with M-Sport – the reigning World Champions. And even more so with the latest Ford Fiesta WRC which is the best car you can drive in rally nowadays.”

“I perfectly understand the chance I have and I will make the necessary efforts and preparation to make the most of the opportunity.”

“Considering these two rallies, I hope to secure a top-fifteen place in Germany and a top-ten place in Australia which represents a reasonable target for me.”

“I hope to have a lot of fun behind the wheel of this car, but always in respect of the team’s advice. I must thank Malcolm Wilson for granting this unique opportunity and also my partners – ALD Automotive, Fleetback and Kroon Oil – who will be supporting me in 2018.”

“It will be great to see Jourdan back in the M-Sport service area this year. And I am sure he is looking forward to getting behind the wheel of the Fiesta WRC.”

“Our clients have always been at the heart of our business. We’re extremely proud of the fact that we are able to offer these unique opportunities. Jourdan will drive the exact same car as five-time World Champion Sébastien Ogier and have all the same tools and information at his disposal.”

“Knowing how hard Jourdan works – and how much experience he has at this level – I have no doubt that he will put absolutely everything into these drives. And our aim is to help him secure his first FIA World Rally Championship points with a new-generation world rally car.”

It was my mistake, Marc Marquez admitted

M-Sport manages the 2019 WRC entry with Evans and Suninen