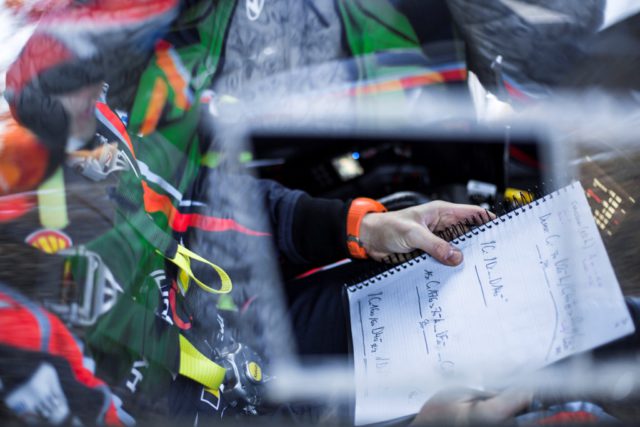 Go and get a book. Now, start reading out loud. Read the first two paragraphs as quickly and clearly as you can. The next three lines needs to be slower, but with much stronger emphasis. Now do all of that running around the house with the heating turned up and a hat on. You’re starting to get some sort of an idea about what it takes to be a co-driver in the World Rally Championship.

Julien Ingrassia tells his fellow four-time world champion Sebastien Ogier, the man who spends much of the year sitting on his left, where to go.

It’s what co-drivers do. They have an answer for everything: left, right, straight on. Ingrassia and his colleagues know

It’s the co-driver’s job to make sure they get to every service and every stage absolutely on time. It’s not a case of, in a minute, it has to be on their precise minute. If they are one minute late, a 10-second penalty is added to their total time for the rally.

But it’s in the stages where they really do their work. When the crash helmets are pulled on and the driver is going flat out, that’s when the co-driver really earns his keep – if he tells the person next to him the road is straight over the approaching blind brow, there will be no lifting.

Commitment and trust is what it’s all about. And it’s just such a relationship that’s made Ogier and Ingrassia the benchmark partnership in world rallying.

Collectively, the co-drivers will be breathing a sigh of relief this week, because the Tour de Corse is done for another year. The French Island is the busiest of the season for the co-drivers. Why? Well, the event’s nickname of the Rally of 10,000 corners probably gives you an idea.

For the first half of the event, the world champions were forced to give best to another perfect pair: Kris Meeke and Paul Nagle. The Citroen duo led the event until the engine on their C3 WRC let go in stage six.

95 pages to read for Julien Ingrassia in the SS9 #TourdeCorse #wrc pic.twitter.com/Pp3SQr7DTp

For Paul, as for Julien, preparation was everything ahead of round four

“Before the rally we are allowed to drive through the stages at a much slower speed to make our pacenotes,” Nagle says. “This is where Kris describes every straight, corner and crest and I write the notes down in a kind of shorthand code. I then read that back to him, I’m a couple of corners ahead to tell him what’s coming.”

So, you’ve got to be good at writing as well as reading in the car?

“Absolutely,” says Nagle. “When we go out to do our recce, I have a pillow on my knees and a clipboard resting on top of that. That gives me a bit of a desk in the car to write on. Corsica’s not so bad the roads are quite smooth, but somewhere like Argentina can be really tough when the car’s bumping around all the time.”

But it’s the reading that brings the real pressure.

“On the final day in Corsica, we had a stage from Antisanti to Poggio di Nazza that was 55 kilometres long,” says Nagle. “That means you’re going to be talking for more than half an hour. And you don’t stop talking, it’s constant reading the notes.”

“A couple of times on this event I tried to take a drink when we were in a stage,” says Nagle, “but it just wasn’t possible. We had a drinks tube coming into the crash helmet and on most events, there’s always a long straight where you’ve called the distance to the next corner and then you can take a drink. There just wasn’t a straight long enough in Corsica to do that.”

As well as reading, the tone of delivery, the pitch of the voice, is absolutely vital. WRC co-driver Stuart Loudon knows all about that. He says: “When you have slow places, you are just reading, reading, reading, getting the notes out as quickly as you can. The key is to finding that rhythm and keeping up with the car – you feel the notes you’ve called in the direction change in the car. Because you’ve your head down in the book, you can’t see where you’re going. The difficulty comes when the stage gets a bit quicker – that’s where the emphasis in the voice is so important. If there’s a fast corner leading to a slower one, it’s really important that I emphasise the voice on the slow corner; it’s absolutely vital to get the car slowed down for that slower one.”

The longest straight, so the theory goes, on Corsica is the one at Ajaccio airport…

This one-way conversation during the stage is conducted via an intercom system built in to crash helmets, allowing driver to hear co-driver. It’s not unknown for the driver to talk back, maybe to ask a co-driver to modify a pacenote, or speed them up or slow them down. But mainly, it’s the man with the book who does the talking.

For Nagle’s Citroen teammates Craig Breen and co-driver Scott Martin, the worst happened on the sixth stage in Corsica – that intercom broke

Breen and Martin were left in complete silence.

At that moment, the only option was for Martin to resort to hand signals.

“I used my fingers to indicate the gear we needed for each corner,” says Martin, “and then I was trying to shape my hand to show him if it was a square corner to the left or right – and I pulled a pretend lever to show him if we needed the handbrake. It was a bit of a nightmare, but we got through.”

Breen was full of praise for the improvisation.

“He worked so hard,” said Breen, “he was absolutely brilliant, but I never want to have to do that again. Driving these roads is hard enough, but doing it without being told where you’re going was a nightmare.”

Co-drivers… they earned their keep in Corsica.

Mercedes approaching Austin the same way as every other race: one step at a...

Nick Chester: Don’t expect to see too much use of the hard tyres in...