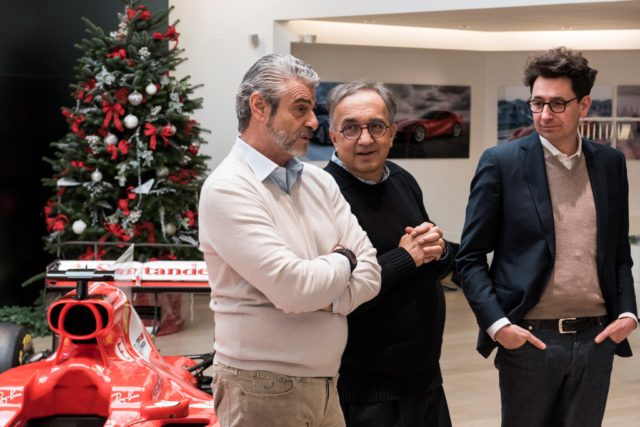 Ferrari president Sergio Marchionne overviewed the 2017 season for his team in Formula 1. The Scuderia finished second in the constructors’ standings, behind Mercedes who won the championship for the fourth consecutive year. Sebastian Vettel and Kimi Raikkonen were second and fourth in the drivers’ standings.

“Given where we started from last year, this season we have taken giant strides forward,” was president Sergio Marchionne’s overview. “Having said that, the second half of 2017 was… character building. We learned a lot over the past six months, trying to move forward and that’s the most important thing. From back in August of last year, when we overhauled the organisation, I totally believed that these guys, with Maurizio Arrivabene as team principal and Mattia Binotto heading up the technical side, would be capable of doing something amazing. We really believed we could do much more: but in 2017, we were unable to reach our objectives.”

“That has also resulted in some changes to the organisation of the Gestione Sportiva. We can already see significant signs of change when it comes to the team’s production capacity. The important thing is to start 2018 with all this expertise and experience and to manage this organisation. I have no doubt that we will be competitive.”

Naturally enough, the conversation moved on to the subject of the drivers.

“Sebastian Vettel is a guy who studies a lot, studies himself and is committed, therefore, I think that we will see less of his emotive side. I think he has learned enough. Plus, there were plenty of opportunities for him to get annoyed, as he’s had a couple of rather difficult seasons, this year and the previous one. I continue to maintain we have an obligation towards these drivers, to give them a car with which they can race the others. I think we gave them a great car in 2017 and so, from now on, it’s down to him.”

“As for Kimi Raikkonen, I believe he is really great, truly talented and I have never doubted his abilities. I tell you, he’s a really top guy, otherwise, he wouldn’t have taken pole at a track like Monaco. I think Maurizio has done a great job with the drivers and that’s not an easy task.”

He mentioned a possibility for an alternative championship from 2020/2021.

“We can’t ignore this possibility, but I prefer to void it if we can. I would like to continue with Formula 1, but we have to find compromises that don’t leave Ferrari without the possibility of showing its DNA in every race. If we can’t find that, then Ferrari has to go away”, he added.

Ferrari announced that the team will reveal its 2018 car on February 22nd.

A look back at the 2017 season. Now it’s time to focus on next year. #ForzaFerrari pic.twitter.com/FfouWCeUM2

Renault to have upgrades at each race for the foreseeable future

Alejandro Agag to transition to Chairman of Formula E