Victory for teammate Elfyn Evans was his maiden WRC triumph, made all the sweeter as he achieved it on home soil. The Welshman became the first Briton to win the wet and muddy forest road event since Richard Burns in 2000.

Evans is the seventh different driver to win in a remarkably unpredictable season. He headed Thierry Neuville’s Hyundai i20 by 37.3sec after leading for virtually the entire four-day, 304.36km event. Ogier finished a further 7.9sec behind.

During the race weekend, Red Bull TV had a special guest commentator – none other than Sébastien Loeb himself. He gave his opinion of what he saw on the stages and in the service park.

How are you finding it at Rally GB?

“I am doing something that I am not used to doing, being a guest reporter on Red Bull TV, and I’m enjoying it. I went to Rallye Monte Carlo at the start of this year but just as a spectator on the stages, I didn’t go into service park. So, this is my first visit to the WRC service park this season, discovering the new teams and it’s great to be here.”

Do you think Citroen will be able to improve after the difficult season they have had?

“I think so. I think they are working on it, I believe they have understood a bit why they struggled so they are working on some evolutions and going in the right way. The others are not sleeping also and their rivals are strong, but I think everything is possible.” 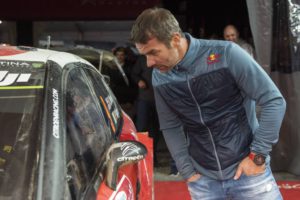 Everybody wants to see you back competing on a WRC event. What are the chances of that happening?

“Is there a chance? Yes. Any decision? No. We were speaking about this also before I had this news on the rallycross championship. Now, rallycross with Peugeot will be my main programme, that’s clear. Then, next to that, if I have time, if I have the interest and if Citroen has the interest, why not do one or two or three rallies? But at the moment, nothing is really planned.”

Lewis Hamilton: “It’s clear to me that Ferrari have chosen their number one driver”