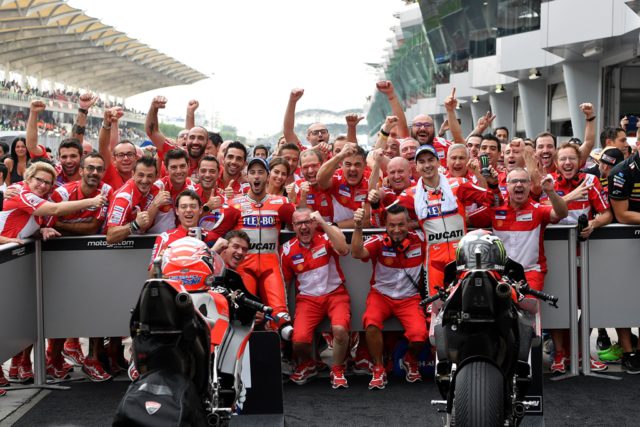 The two Ducati Team riders Andrea Dovizioso and Jorge Lorenzo produced an outstanding performance at the Sepang International Circuit. The Italian won the Malaysia Grand Prix, held on a wet track, ahead of his teammate. With this victory, his sixth of the season, Dovizioso keeps the title battle alive and at this point, it will go down to the final round of the season at Valencia from 10-12 November.

Dovizioso, who started from row 3 in third place, didn’t get a perfect start and had to battle with Pedrosa on the opening lap. The Italian then caught and passed Marquez on lap 5, before setting after the leading duo made up of Zarco and Lorenzo. On lap 9 both Ducati Team riders passed the Frenchman and then Dovizioso was able to overtake his teammate five laps from the end and hold on to first place until the chequered flag. 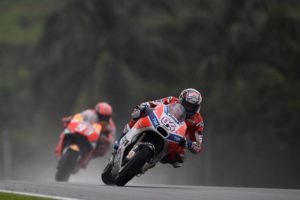 “It was a truly perfect weekend: we were quick in every session, both in the dry and in the wet, and today in the rain we dominated. At Sepang Jorge and I really had a bike advantage, because our Desmosedici was very fast, and we managed to administer the gap in the best possible way even though track conditions were very difficult because there wasn’t much grip. I’m very pleased for the win which keeps my hopes alive for the title, and even though I know it will be very difficult at Valencia because it’s a track where Marquez always goes well, we’ll be going to Spain with confidence to try and bring home the victory.”

“It was a great race that showed the progress we made throughout the weekend. I was really at ease on the bike, and even though I’d have preferred a dry race, when I saw it was raining I changed my mentality and tried to keep focused, in order to avoid a mistake like Misano.”

“I pushed hard. But in the last few laps, I was in a bit of crisis with the tyres, especially the front. I had a few scary moments in some corners. It wasn’t the right time to do anything stupid. And when I almost crashed at Turn 15 and Andrea passed me I realized that I wasn’t going to be able to fight for the win. I know exactly how important a world title is for Ducati. Dovizioso has had a fantastic season and deserves to fight for the championship right down to the last race. In this weekend Andrea has always been faster. I’m pleased for the team for this first 1-2 win of the season because it means we’re working really well.”

“I’m really pleased about the splendid result, which keeps the title battle open until the final round. Both Andrea and Jorge did a perfect race, without making any mistakes despite difficult track conditions. And the Ducati proved to be the bike to beat on this track. It was a memorable team result. Now we are going to Valencia with the knowledge that it will be a tough task. But we will play our cards right down to the very end.”

The new Passat will be the first Volkswagen to offer partially automated driving at...

We demonstrated further at Aragon the improvements we are making, Dovizioso says