Hyundai Motorsport has made a tentative start to the penultimate round of the 2017 FIA World Rally Championship (WRC), Wales Rally GB, with all four of the team’s cars inside the top ten. Three-times rally winner this season, Thierry Neuville moved up into fourth place overall after taking a stage win.

That happened on the day’s final test, Hafren, and Neuville was 37.1s from rally leader and home hero, Elfyn Evans. The Belgian had incurred a ten-second penalty on Thursday evening’s super special stage, Visit Conwy Tir Prince, after the car would not start ahead of the stage, putting him on the back foot from the outset of the rally. Early struggles with the car in the morning loop improved and the Belgian crew ended the day with a stage win.

“We have made improvements during the day and can be satisfied with where we are considering our time penalty from Thursday”, Neuville said

“The pace is there and we would have liked to be fighting at the top but that put us behind before we’d even really started. I struggled with the settings of the car on the first stage this morning, stalling the engine after running wide and losing some seconds. We changed the differential settings midway through the loop and found some improvements, which have allowed us to move up. Finishing the day with a stage win is encouraging and gives us the motivation we need to keep pushing on Saturday.” 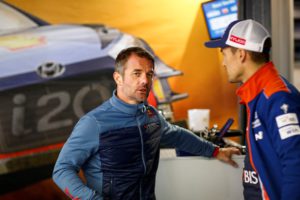 Andreas Mikkelsen, in his second WRC event with Hyundai Motorsport, heads a trio of Hyundai i20 Coupe WRCs in seventh place overall ahead of Dani Sordo in eighth and Hayden Paddon in ninth

“Although the weather conditions have been fine today, the stages are still incredibly slippery. And that has made things quite difficult. From our road position, there hasn’t been much more we could do today. We are still learning about the car in these gravel conditions. That is our objective also for the rest of the weekend, and we hope to make up a few more positions on the way, as well”, Mikkelsen explained.

With no lunchtime service, the Spanish crew of Sordo and Marc Martí were focused on making it safely through the first day in the Welsh forest. Dani had problems with the changing grip all day long.

“The team has worked incredibly hard to allow us to run four crews in Wales. And we now need to use this to our benefit. The conditions have been typical of Wales – unpredictable, slippery and evolving. It is precisely what makes the rally as enjoyable. All four of our crews have faced some challenges with the car settings today. Thierry showed the improvement made by claiming a stage win in the second run through Hafren. That will set him up well for Saturday. Andreas, Dani and Hayden are all inside the top-ten. They will be trying to find more pace and performance as this penultimate round of the 2017 Championship unfolds. All the lessons we are learning this weekend will serve us well for 2018.”

I just will drive with my feeling and we’ll see where we are at...

There was nothing wrong with the car, but we just weren’t very fast enough,...