Series young gun Rosenqvist took advantage of a clean starting line to pass eventual race winner Sam Bird into the first corner of the 49-lap feature. Heidfeld also made gains in the opening laps of the race to follow his teammate into the podium positions.

The team was unable to hold the lead, as Bird took back P1 shortly after lap 10 of the race. However, the impressive 2-3 podium represented a dramatic change in fortunes for the team after a disappointing first race. The result in it was an uncharacteristic 15th place finish for Rosenqvist, while Heidfeld retired from 7th position with suspension damage.

It wasn’t enough to deter Mahindra Racing from storming to a double podium result and extending its hold on third in the Teams’ Championship with just two races remaining.

“I am delighted to secure our second double podium result of the season in this inaugural New York City ePrix weekend. We cannot hide from the disappointment of the opening race on Saturday, but it made us even hungrier to get a fitting result in Sunday’s extended race. This has been an important weekend for Mahindra Racing, so to end it with a second and third place is really positive. We have shown that we can bounce back from a difficult race, and our aim now is to finish the championship on a high.”

“Our second double podium of the season has really cemented our command of the M3Electro at the hands of our drivers Felix and Nick. Following our maiden victory in Berlin last month, it is so satisfying to be able to follow it up with another strong result. 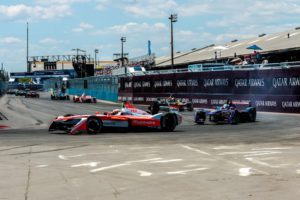 “I’m thrilled to be back on the podium after a great New York City ePrix. It was feeling pretty good in the beginning and I had a very good start off the line. I thought we had the race under control with Sam. It was great we challenged him for the lead, and though he got past me again at the end of the first stint we were able to show that our car is capable of winning races. It’s a great position to be in for the final two rounds of the season and I can’t wait to get back in the car in Montreal. 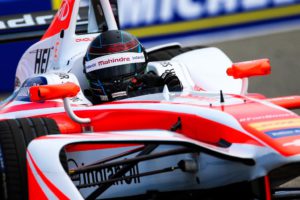 “It was a good race and quite exciting, to finish with another double podium is fantastic. I managed to gain a position from the start and was also pushed a bit from the back. Luckily the car stayed in one piece! After that, I had very good pace, better than the cars in front but I tried to play it safe especially after what happened yesterday. It was important not to risk anything. With Felix’s issue, I could move forward to try and put some pressure on Sam.”

Chile joins the cities in the Formula E calendar

The challenges of Rally Deutschland are even bigger in 2017