Thierry Neuville almost admitted after Rally de España that he has no more hope to take this year’s crown in the World Rally Championship. The Hyundai driver had another bad weekend. The result was a retirement and even further retreat – he went third in the drivers’ standings, behind Ott Tanak. Now Neuville is 38 points behind Sebastien Ogier with two rallies until the end of the season.

For Neuville and co-driver Nicolas Gilsoul, any hopes of a podium charge were hampered on Saturday morning following a hydraulics issue. However, the Belgians were still targeting a top-five finish when disaster struck on SS16. Suffering front-right damage after taking a slow corner too tightly, and with no service, the crew was forced to retire. 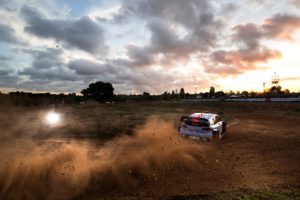 “We are obviously hugely disappointed, but at the same time this sort of bad luck is part of the game in the World Rally Championship”, Neuville said

“After our problems on Saturday, we were pushing hard to make up time. Unfortunately, I turned a bit too tightly in a slow corner in SS16 and hit something that damaged the wheel, and caused the front suspension to break. That was it, game over. Of course, this result makes things much more difficult in the Drivers’ Championship, but we have to keep both feet on the ground. We have had a fantastic season on the whole. The team has put in a great effort to give me a fast car. This just hasn’t been our weekend. Now we want to finish the season with some good results in GB and Australia.”

“I don’t know if there’s a weakness”, he told wrc.com on the suspension failures he and his Hyundai teammates suffered.

“My part is to drive the car as fast as I can and give feedback from there while driving. Cars are not made to go through the bushes to hit the mountain, but we have to analyse and to see – if it is that the Ford survived where Dani [Sordo] and Andreas [Mikkelsen] retired, then we have to see why we didn’t.”

The team will investigate all the failures.

As long as mathematically there’s a chance to win the #WRC title, we won’t give up. Will fight hard & hopefully have a strong end of season. pic.twitter.com/MtLkaAFJpf

From vision to change: Electromobility at the BMW Museum

Ogier: It’s definitely a three-way fight for the title now