The 5.543km Sepang International Circuit has been on the Formula 1 calendar since 1999, hosting of the Malaysian Grand prix. It features a number of medium-speed to fast curves as well as a couple of tight hairpins which means finding the right setup balance is tricky. The back straight and the start-finish straight will be a good DRS overtaking opportunity come race day. The weather often plays a part in Malaysia with rain a constant occurrence due to its hot and humid climate.

This year’s race will be the last Formula 1 start at Sepang as the Malaysian organisers decided not to continue their contract with FOM. 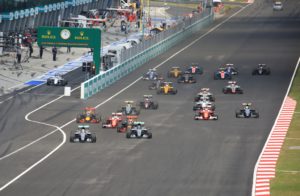 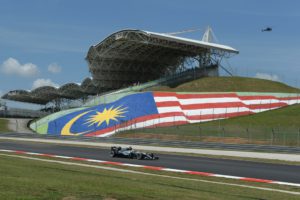 2.2 – The biggest roundabout in the world is in Malaysia at 2.2 miles in diameter.

20 – According to estimates, Malaysia has 20% of the world’s animal species. 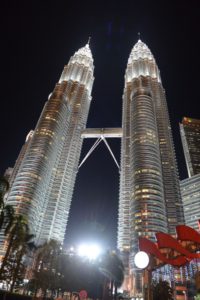 History lesson Malaysia has had a long and fruitful association with Formula 1. It began in the late ’90s when the Sepang International Circuit was constructed on agricultural land near Kuala Lumpur International Airport, and it has been a regular fixture on the F1 calendar since ’99. The track was the first to be designed and built by architect Hermann Tilke, whose influence extends to 10 circuits on this year’s calendar, and the undulating 5.543km/3.444-mile layout is recognised as one of the most exciting challenges in the world for drivers 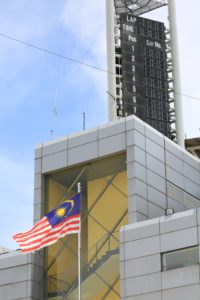 Getting there All of the Formula 1 freight has made the 300-mile (483km) trip from Singapore (scene of the last grand prix) to Kuala Lumpur by road. However, the two-week gap between races has meant that all team personnel have flown back to the UK for a week and will begin travelling to Malaysia at the start of race week. More than 50 international airlines fly into Kuala Lumpur, so there are many flight options from London

Surprising fact Malaysia has an incredibly diverse population. Of the country’s 32 million people, 50 per cent are Malay, 23 per cent are Chinese, seven per cent are Indian and the remaining 20 per cent are comprised of indigenous groups

Local speciality Malaysia is called the street food capital of Asia, and with good reason. Hawker stalls are found everywhere and offer everything from samosas to spicy noodle curry and cendol, which is a desert made from sweet grass jelly and coconut milk

Weather Late September is still the high season, but the chance of rain increases as the monsoon season approaches. Temperatures will be slightly higher than they were in Singapore two weeks ago because the race takes place in the day, so teams should expect an ambient of 30 degrees Celsius and 80 per cent humidity 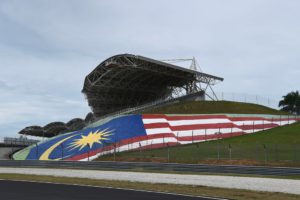 Tyre choice Red Supersoft, yellow Soft and white Medium compounds – the seventh time this combination has been used in 2017

Full throttle 65 per cent (highest of the season: Monza, 75 per cent). The longest period of full throttle is 12s, on the approach to Turn 15

Brakewear Medium. Only 15 per cent of the lap is spent braking

Fuel consumption 1.79kg per lap, which is average

ERS demands Medium. There is a high dependency on ERS at every track, but the eight braking zones around the lap make it possible to recover braking energy 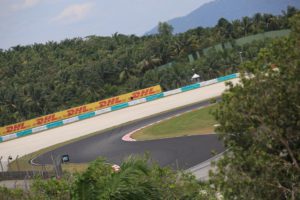 Grid advantage The racing line is on the left and that’s where the grip lies at the start. However, there’s a rainstorm most evenings, so there’s a chance that the grid will be washed clean before the start, negating any grid advantage

DRS There are two DRS zones, on the approaches to Turns One and 15

Don’t put the kettle on… The combination of high track temperatures and fast corners encourages drivers to make more pitstops, not less, at Sepang. Daniel Ricciardo won last year’s race with two stops, while Max Verstappen finished second with three, and strategy was influenced by three Virtual Safety Car periods. Pirelli are taking softer tyre compounds to the race this year, which could lead to even more stops. A conventional three-stopper would result in cars visiting the pits on laps 10, 25 and 40

Safety Car likelihood 20 percent. There tend to be lots of incidents and accidents at Sepang, but large run-off areas allow marshals to get cars out the way quickly

Watch out for… Rain. The later start time of 15:00hrs pushes the finish of the race towards early evening, which is when the rain showers tend to hit

Webber’s fury at Vettel after ‘Multi 21’ call is ignored ?

Everything you need to know about Pole dancing. Welcome to Rally Poland

Mercedes made sure that they understand what went wrong in Melbourne