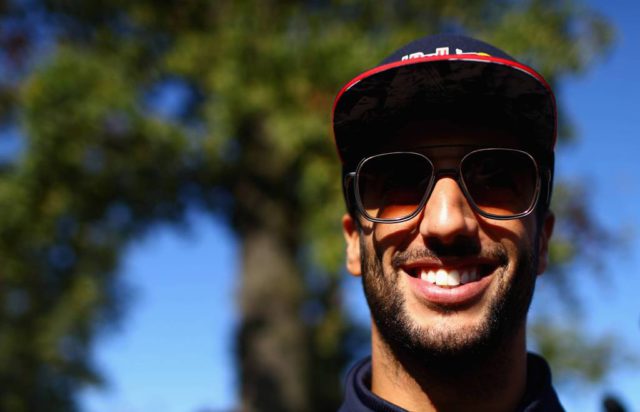 Daniel Ricciardo believes that the Singapore Grand prix is one of the best chances for his Red Bull team for a win during the second half of the 2017 F1 season. The Australian took the victory in Azerbaijan, while the rest of the wins went to Lewis Hamilton (6), Sebastian Vettel (4) and Valtteri Bottas (2).

“I believe Singapore won’t be our only chance but is one of our best chances of a win in the second half of the season”, Ricciardo said.

“You have to build up speed a little slower in the practice sessions on a street circuit like Singapore. At some point, you have to start taking risks but to do that straight away doesn’t make sense.”

“I always prepare for the race with some acclimatization training. You feel the heat when you’re in the car, but when you stop after the race and the adrenaline decreases you feel it even more. After the race, I will easily sink five litres of water to rehydrate before I go to bed.”

“I’ve started second and finished second at this track in the last two years, with the fastest lap both times, so my aim this year is definitely to start on pole and try to go one better in the race.”

Ricciardo: “I believe Singapore won’t be our only chance but is one of our best chances of a win in the second half of the season”

Max Verstappen added that he is looking forward to Singapore “as it’s always a special weekend”.

“The race has been a strong one for us in the past and I think we should be able to challenge for a podium this year”, he continued.

“The night race and hot temperatures really test you to the limit and for me, Singapore is physically the hardest race of the season. I have been preparing already for a

few weeks doing heat training in the sauna and getting ready to sweat so I can cope with the heat in both Singapore and Malaysia.”

“The track itself has a lot of corners which is why I enjoy driving there and like most street circuits it’s pretty bumpy which makes it even more challenging.”

How does our #F1 simulator compare to a Soyuz rocket? ? @astro_timpeake puts it to the test ? #GivesYouWings pic.twitter.com/V5qtUMcuWi

Neuville: Our goal for Poland was to outscore Ogier and we did it