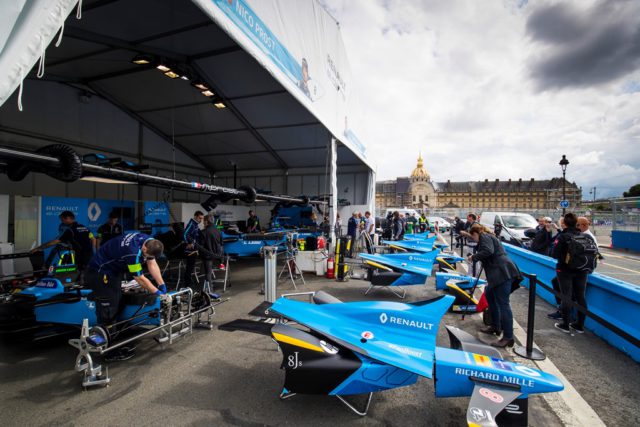 This week, the FIA Formula E Championship makes its first visit to New York for the penultimate round of the 2016/17 season of the championship. This doubleheader will be held on the streets of Brooklyn, around Pier 11 and the Brooklyn Cruise Terminal on July 15th and 16th. This new circuit drawn under the background of Lower Manhattan and the Statue of Liberty offers a total of ten turns with a mixture of fast portions, hairpin turns and a straight line directly to the waterfront. Renault e.dams moved into the “Big Apple” with 229 points, a 58 points lead over their nearest rival ABT Schaeffler Audi Sport.

Nevertheless, it will be a different weekend for Renault e.dams that will not count on the presence of Seb Buemi

He is retained with Toyota in the FIA WEC Championship for the 6 hours of the Nürburgring. That race is held on the same weekend as the New York ePrix. French driver Pierre Gasly will replace the championship leader for both races and will try on his Formula E debut to help the team keep its first place in the teams’ standings. With only four races to go to claim the supreme crown, this is no time for mistakes for Renault e.dams who have consistently scored points in all races. But everything is still to play for…

“I am really excited about New York which will be a brand new experience. It is going to be a great challenge to get in a Formula E car for one ePrix. There are a lot of things to learn in a very short time. I would like to thank Renault e.dams for the great opportunity and I am looking forward to discovering this Formula E car in Brooklyn.”

“I lived three years in New York. So it’s a bit like a home ePrix and there’s the will to do it right. It is a very important weekend at the championship draws to a close for both the team and me. I want to get the third place back, at least. We know that it will be a tough fight.”

Pirelli brings supersoft to COTA for the first time