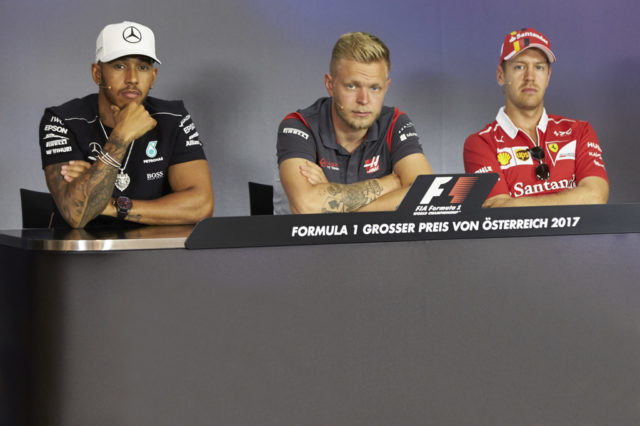 Lewis Hamilton accepted Sebastian Vettel’s apology for the incident between them during the Azerbaijan Grand prix. The Mercedes driver also explained in Austria that he still respects his Ferrari rival.

“I said everything I felt I needed to say at the last race and just left it there. Now the job is just to focus on the coming race. Still got a lot of races ahead of us and a little bit behind points-wise. So just trying to keep my head down”, Hamilton said during the press conference at the Red Bull Ring Circuit.

“Sebastian and I, we spoke after the race and on Monday and shortly after that he messaged me, I think the day after it was”

“I still have the utmost respect for him as a driver and will continue to race him hard for the rest of the season in the same way I always have. No less hard than we have been already up until now.”

“The situation is a little bit different perhaps to if it had happened on a football pitch and you’re face-to-face with someone. I think maybe your initial reaction would be different. But we’re strapped into these cars so there’s not much I can do in the actual car at the time. As I said, I was more focused on the race result and the difficult race that we had had.”

“So, whilst that was a difficult scenario – or an unfortunate mishap during the race – that was not my main focus or goal. While there are questions about it, I was just thinking about the points that we had lost. How we are going to regroup as a team again to try to make sure we don’t have that same issue again, and that we still have a pretty steep mountain to climb before the end of the season.”

“My only point to Sebastian was that I felt that, saying I had brake-tested him”

“I was like, I hope you can correct that publicly – because people who are watching felt that this was something I did. In the data, it obviously showed that was not the case. In the actual case, he accelerated. I think the goal was to try and be as close as possible to me but that was an error in judgement. My own point there in reply to him was that I hope he makes that clear because I had no intentions… there was no need for me to do something like that. I was in the lead. And… yeah. I accepted his apology and moved forwards.”

HAM: “I really don’t think there’s any tension between us. You guys [media] might think there is, but I don’t feel it” #AustrianGP pic.twitter.com/nbfM21jREX

Grosjean: Even in the straight lines at Interlagos you can’t rest as much as...