Show Start in Saarbrucken, a spectacular new city circuit stage, challenging new Special Stages in the Saarland and an exciting final Power Stage finishing at the Service Park. These are the highlights of the new ADAC Rallye Deutschland. The event will take place between 17 and 20 August 2017 in and around the Saarland. This year, the agenda includes 21 Special Stages (SS) covering some 340km. The newly designed Service Park at Bostalsee will be the rally hub. Centrally located and only a short distance away from all Special Stages, the area in the northern Saarland is ideal for both fans and rally participants. The Rally Headquarters will be in Bosen, not far from the Service Park. Pre-sale rally passes to the ADAC Rallye Deutschland are available from the official ticket shop at adac.de/rallye-deutschland.

Show Start against the backdrop of the Saarbrucken State Theatre

The Saarbrucken city centre will turn into a WRC venue on Thursday evening, hosting the official Show Start of the ADAC Rallye Deutschland on Tbilisser Platz in front of the State Theatre. Entry to this event where all the crews will present themselves and their high-tech rally cars will be free. Afterwards, the fans can look forward to lots of rally action: right after the opening ceremony, the rally participants will compete in a prologue on a circuit stage in Saarbrucken. Since the times will count towards the classification, this will promise plenty of thrill. The Shakedown will also take place on Thursday. This pre-event test will be mandatory for all participants and held in Eiweiler, located only a few kilometres west of Bostalsee. 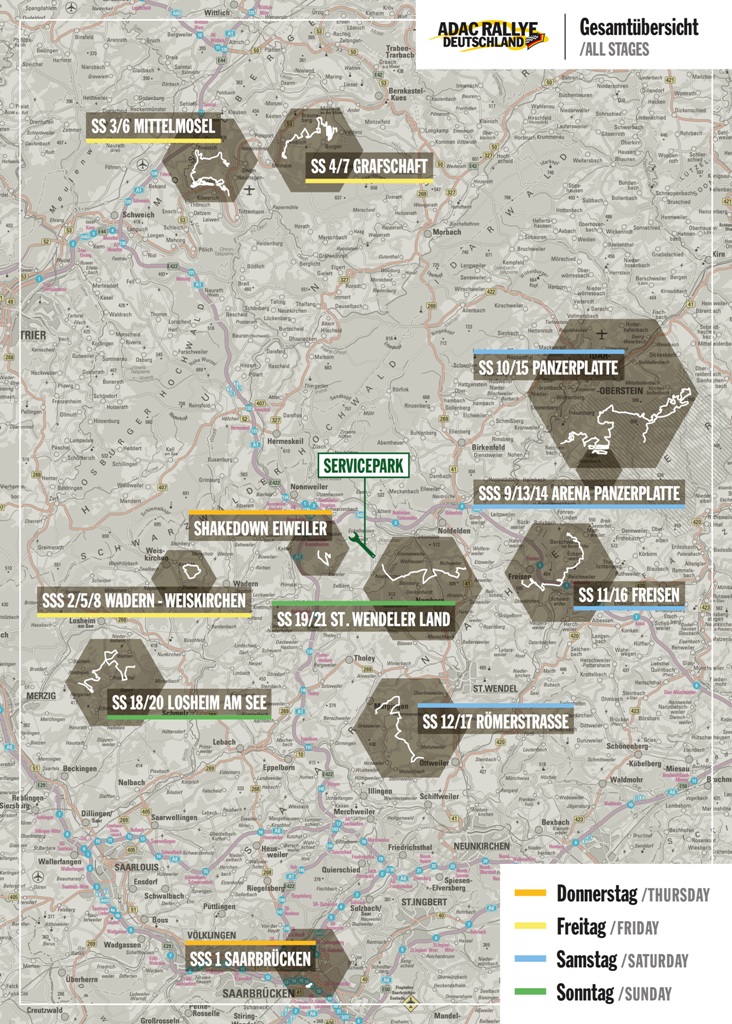 The vineyards in the Mosel region continue to be the main venue on Friday. However, before the rally elite tackles both the Mittelmosel SS and the Grafschaft SS twice – the latter being back on the agenda with a new itinerary – the spectators will start the day enjoying a new highlight. The new Wadern-Weiskirchen SS is a compact circuit providing ideal conditions for spectators. The rally drivers will tackle it three times during the day.

Saturday’s rally action will take place on the Baumholder military range also in 2017: the rally drivers will fight three sprint battles on the almost three-kilometre circuit at the Arena Panzerplatte. It offers the spectators views of almost the whole track. The extended Panzerplatte stage will be run twice. In addition, there will be two runs on the Freisen-Westrich SS. With numerous ascents and descents as well as many kinks, this low-hill SS between the Saarland and the Palatinate will make drivers feel like on a roller coaster. Another Saarland highlight is the Romerstrase SS. Located in the west of St. Wendel, it will make its debut in 2017 and will be run twice between Ottweiler and Marpingen. 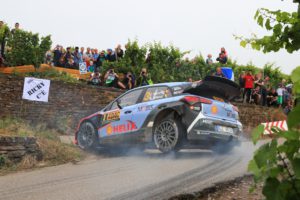 Power Stage to finish at the Service Park on Sunday

The ADAC Rallye Deutschland will see another premiere on its final day which will start with the new Losheim am See SS. It will take the rally participants to the region where the three countries Germany, France and Luxembourg meet. The St. Wendeler Land SS will bring the rally action back pretty close to the Service Park. The second leg of this stage will be the final Power Stage where the drivers can earn extra points for the WCR classification. Finishing right at the Service Park, the final stage will be a special highlight for spectators. This is also where the podium ceremony will take place, giving rally fans ample opportunity to once again celebrate their WRC heroes.

The German rally secrets according to Neuville: a good set-up, confidence, precise pacenotes