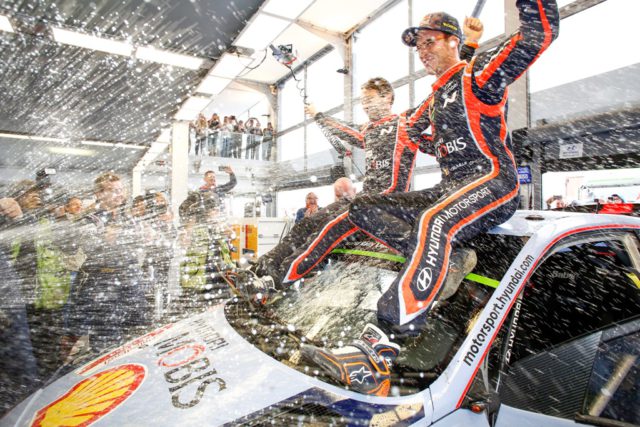 Thierry Neuville and co-driver Nicolas Gilsoul took their fifth victory with Hyundai in WRC – in last weekend’s Rally Poland. This win was their third in 2017, as well as a sixth consecutive podium. Consequently, Neuville has reduced the gap to Sebastien Ogier in the Drivers’ Championship to 11 points.

“What а great result for the whole team! I am really delighted for everyone involved. It was а closely fought battle, as it seems to have been for the past few events. lt was certainly а relief to retake the lead after Ott [Tanak]’s retirement, as it allowed us some breathing space in the final stages. We could take it easy and relax – not too much – but enough to finish the rally calmly and to secure this great result. Our goal for the weekend was to outscore Seb, which we did, and we have closed the gap in the championship for the second rally in а row. We have to continue in this way but for now, we сап enjoy our third win of the season, and celebrate with the team who have worked so hard for this result.”

“It was an incredibly tough weekend again and the conditions were so difficult. We were again involved in a huge fight for the victory. It was very demanding. A lot of energy and concentration. This time, there were no mechanical issues and it gave us a great opportunity to score maximum points without taking too much risk.”

“[The last day,] it was horrible, to be honest. We were able to read the comments of the first drivers before we started. I drove fast and always with a small margin and still, I went wide a few times. It was surprising to see Ott 4.9 seconds faster than me in the first [Sunday] stage. I wasn’t sure if he went crazy or the set-up on my car could have been better, so I spoke to some people who saw him passing. And they saw him passing like hell. I knew I had to react and I went faster on the next one. Then I found out what had happened to Ott.”

Thierry Neuville and co-driver Nicolas Gilsoul took their fifth victory with Hyundai in WRC – in last weekend’s Rally Poland. This win was their third in 2017

“I wanted to go as fast as possible but we have to be clever. The fight is tough. Ogier is always close to or on the podium and, if we want to catch points, we have to be at the finish. Now, if I could go and do the stage again, I would go a little bit faster, but not more than this.”

“The feeling is good at the moment. We have to see again now for Finland. We have seen in the last couple of races that we have been quite consistent. Portugal, it was impossible to win, but we were strong again here like Sardinia. I hope the car will be fast. It felt good here, I had no concerns. Finland is probably one of the most difficult rallies in terms of speed and precision. It is easy to do a mistake. It is a tough event and a good approach is needed”

Nicolas Gilsoul added that the crew’s main target was to get to the finish.

“We decided to split the season, rally-by-rally, to try and catch some points rally-after-rally. The goal is to catch Ogier and Julien [Ingrassia]”, he said.

Together we stand,
Together we fall,
Together we WIN!?
A huge #ThankYou to @HMSGOfficial & my co-driver @nicolasgilsoul #TeamVictory pic.twitter.com/ra90joZ6GM