Hyundai Motorsport will aim to continue its recent run of podium results as the FIA World Rally Championship (WRC) moves to Poland for round eight of the 2017 season.

Having secured top-three finishes at every gravel event so far this year, including victories at Tour de Corse and Rally Argentina, hopes are high that the team can once again challenge at the front of the competitive WRC field.

The scene of two previous podiums, in 2014 for Thierry Neuville and in 2016 for Hayden Paddon, the team will be looking for another assured performance in this year’s event.

Despite claiming a podium last time out in Sardinia, and showing the rally-winning capabilities of the Hyundai i20 Coupe WRC, the team lost some ground to M-Sport in the close Championship battle. Efforts will, therefore, be refocused on securing a stronger combined team result.

More than one-third of this year’s itinerary is new, meaning that accuracy of pace notes will be of paramount importance. The three Hyundai Motorsport crews of Hayden Paddon/Seb Marshall, Thierry Neuville/Nicolas Gilsoul and Dani Sordo/Marc Martí all tested in Lithuania last week in preparation for Rally Poland. With five different winners across the first seven events, it promises to be another competitive WRC weekend.

Hyundai Team Principal Michel Nandan commented: “From the hot coastal setting of Sardinia, we move onto the fastest rallies of the season – Poland and Finland – which will offer a brand new set of demands”

“Poland is a rally at which we have always been quite competitive, with a podium in our debut season and again last year. We know our car is well suited to gravel but now will be the first true test at higher speeds. Our target is very much in the Championship battle, which is intensifying with each event. We need to ensure a strong team result at all rallies if we are to take the fight to M-Sport. That means we need to work with all three of our crews to help them to get the best out of their cars, and indeed themselves on each stage.”

Paddon demonstrated strong pace in recent gravel rallies, taking multiple stage wins in Portugal and leading in Sardinia for a large part of the event

Alongside co-driver Seb Marshall, the Kiwi will put his recent frustrations behind him and target his first podium of 2017 in Poland.

Paddon said: “Our performance in Sardinia showed exactly what we are capable of achieving. It was a shame to lose the lead in the way that we did, but we have to bounce back. I have spent some time back in New Zealand in between the events, which was good to help refocus. Poland is definitely one of my favourite rallies. It’s one of the fastest of the year, and of course, I love going as quick as I can! I think the car will suit the roads quite well. We’re looking forward to it and as always we’ll be giving it 100%.” 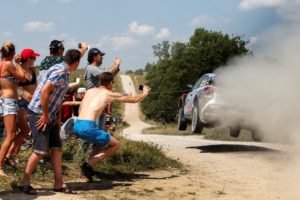 Neuville and co-driver Nicolas Gilsoul head to Poland, hoping to extend their run of five consecutive podiums, which dates back to Rally Mexico

Holding second in the Championship after seven rounds, the Belgian is just 18 points from leader Sébastien Ogier and knows that every rally will be crucial.

Neuville said: “I really enjoy Rally Poland as I like the flow of the stages. There are not as many dangerous corners and the stages are quite open. You can be a bit braver on this one and take a few more risks. It is a lot of fun because the speed is just amazing, but at the same time, we know that we have a job to do and we want to continue to press as hard as we can to stay in the Championship hunt. We are now in the latter stages of the season, so this is where every moment and every decision matters.”

Ending @ypresrally with a stage win in SS19 and a second fastest time in SS20. It was a great day and we enjoyed a lot! #BackInTown pic.twitter.com/aEJsYODsTl

Poland will offer them a chance to fight for their third podium of the season.

Sordo said: “Given the speeds that can be reached in Poland, it is vitally important that our pace notes are accurate. This is particularly the case through some of the corners, where you can lose a lot of time if you make even the smallest mistake. There is no margin for error because it is a really, really fast rally. In general, the atmosphere is nice, with huge crowds present, so it is an enjoyable event. We finished very strongly in Sardinia, and will look to build on that in Poland!”