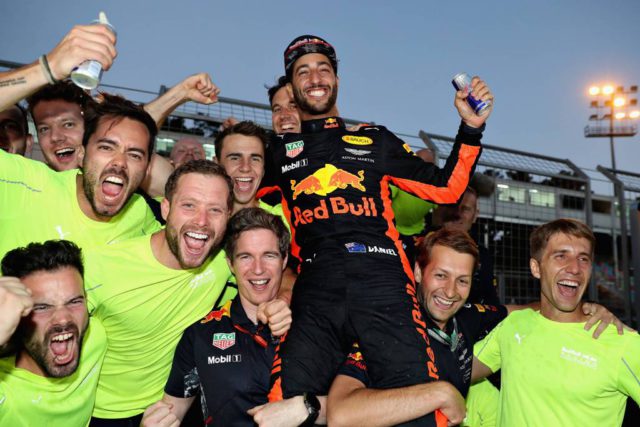 Daniel Ricciardo knew at the start it was highly unlikely to win the Azerbaijan Grand prix. But when he was in a position to take the race, the Australian driver never hesitated. He controlled the pace, saved his car and smiled from the highest step of the podium.

“I have never really had a boring win and today was certainly not that”, Daniel Ricciardo said after the finish.

“After all the chaos and the red flag, I felt that a podium was within reach but then once Lewis [Hamilton] had to pit and Seb [Vettel] had the penalty I knew the win was possible. I kind of said that after my qualifying mistake and starting in tenth place, it was going to be a race of no mistakes, capitalising on moments and opportunities. And I felt like we did everything we could. The odds of a podium or win got pushed even further back when we had to make an unscheduled pit stop early in the race. I think I was back in seventeenth place.”

“Then things fell into place quite nicely. On every restart, I was able to make up positions and make it happen. The last re-start was the most important and I think it was [Lance] Stroll, [Nico] Hulkenberg, [Felipe] Massa and me, all nearly four wide but I managed to get third and I think that was, in a way, the winning move. Once I saw the gap I was going to do everything I could to brake as late as possible and get that position. It was a real shame for Max [Verstappen] but it is great to get this victory for everyone in the team. I felt like this weekend was better for us overall. And hopefully, both of us can be on the podium together soon. What a day, it’s crazy and it’s slowly sinking in.” 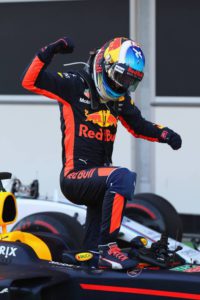 Verstappen did not finish the race after what looked like a promising position at the beginning of the race.

“I was gutted to be let down once again by a technical problem. After an action packed race, we were confident we could have had at least a podium here in Baku. So I am very disappointed with this outcome”, the Dutch driver admitted.

Those Mondays after a win on Sunday ?? #givesyouwings pic.twitter.com/TxZDHpLXQj

That victory was testimony to the car and Daniel’s ability behind the wheel, Horner...