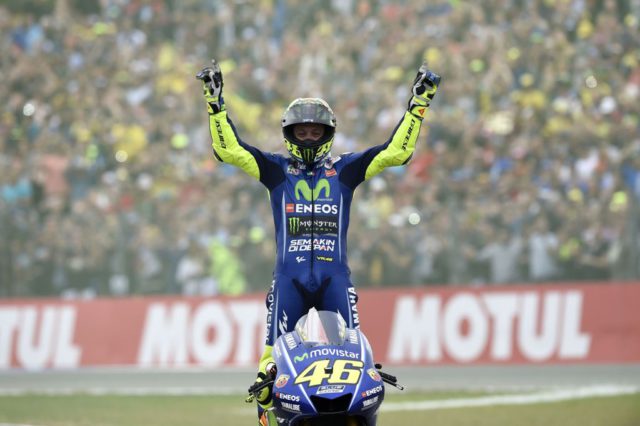 Yamaha MotoGP Team’s Valentino Rossi brought his A game to the Motul TT Assen race today. The nine-time World Champion completed a challenging weekend due to mixed conditions with a superb win, giving him the longest winning career through all classes, spread over 20 years and 313 days. Teammate Maverick Viñales fought his way up from eleventh on the grid and was heading towards the leading group, but his efforts ended in a DNF after an unlucky fall.

Rossi kicked off the Dutch Grand Prix from the fourth position as darker skies loomed. He quickly slotted in behind Johann Zarco and Marc Marquez in third place and was quick to respond as his rivals attempted to break away, setting a provisional fastest lap of the race on lap three and four, with Danilo Petrucci tagging along.

The Doctor piled on the pressure with 17 laps to go and overtook Marquez a lap later in the first corner, making the fans cheer. He duplicated this manoeuvre on the next lap to take over the lead from Zarco, which was followed by a touch between the two in turn 4, but the Italian kept the lead. Four laps later the Factory Yamaha man inched away as his pursuers battled for second place.

The Doctor increased his lead to about a second, but with 8 laps left white flags came out as rain started to fall

Rossi was forced to lower his pace, allowing his rivals to close up. Adrenaline levels reached an all-time high for the VR46 fans as their hero fought tooth and nail to hold off his rival. Petrucci passed him with five laps to go, but the nine-time World Champion wasn‘t going to let the win slip away that easily. A lap later he used his nimble Yamaha YZR-M1 to charge past his compatriot in the chicane to regain the lead. In the last laps, the pair dealt with backmarkers, but Rossi held firm, taking a sensational win with a 0.063s advantage.

Today’s results see Rossi move up to third place in the championship standings with a 108-point total. He is now three points behind his teammate Viñales in second place. The sensational win sees Yamaha hold the lead in the constructor championship with a 22-point margin and Movistar Yamaha MotoGP remain the leaders in the team standings by 28 points as they move on to Germany for the next round at Sachsenring in one week’s time.

“I’m so happy, and for different reasons, because it’s a very important victory for the championship, but especially the feeling of coming back to the number one spot after one year is fantastic”, Valentino Rossi said

“Sincerely, I race with motorcycles for this feeling: for what I feel in the five or six final laps of the race. That’s always great and especially after a year without a victory. It was a great race and a great battle with Petrucci and everybody else. I’m also happy from a technical point of view because we worked a lot on the bike and we changed the chassis and now I feel like I can ride the bike more in my own manner, in a better way. Everything is open and this year we discovered that from one track to the other, the situation can change a lot. We have to wait for next week and try to be competitive also at the Sachsenring.”

A survey shows only 5% of EV drivers would ever go back to a...

Marc Marquez on pole in Austria