Toyota will start the 85th 24 Hours of Le Mans from pole position after setting the fastest-ever lap of the Circuit de la Sarthe in the final qualifying sessions.

Kamui Kobayashi became the second Japanese driver to earn pole position with a lap of 3mins 14.791secs at 8.14pm during second qualifying in the #7 TS050 HYBRID he shares with Mike Conway and Stéphane Sarrazin for an average speed of 251.9km/h.

That was 2.096secs quicker than the previous lap record on the current layout while the average speed was faster than for any previous lap in the 94-year history of the event, beating the 251.815km/h set by Hans-Joachim Stuck in a Porsche in 1985.

Toyota has started from pole position twice before at Le Mans. That was in 1999 with Martin Brundle and in 2014 with Kazuki Nakajima. It is the team’s 12th in the FIA World Endurance Championship (WEC) since its debut in 2012.

It will be an all-Toyota front row, with the World Championship-leading #8 TS050 HYBRID of Sébastien Buemi, Anthony Davidson and Kazuki starting from second. Kazuki set the quickest lap from the three qualifying sessions, in third qualifying.

The day started with frustration for the #8 with Sébastien hitting trouble on his first lap. The car required a precautionary engine change due to an oil supply issue and missed second qualifying.

Porsche took the third and fourth position, while the third Toyota will line up fifth on the grid. 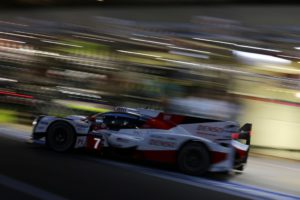 .@kamui_kobayashi happy to set the fastest time from the qualifying practice in 3.14.791 #LeMans24 pic.twitter.com/5uA7tYkqQ8

There is no track action on Friday in order to give teams time to prepare the cars properly for the race. As well as the team, the drivers are also busy, with the traditional parade through the city centre. A 45-minute warm-up on Saturday morning is the final preparation before the race, which starts at 3 pm local time.

“A big thanks to the team for this result”, Kamui Kobayashi said.

“I got in the car with 100% confidence and when you are confident, you are quick. It was an amazing lap and the car was brilliant. It was the right moment, just after the red flag with no traffic. I am really proud of this pole position. Still, it is a 24-hour race so the important thing is the race result and that is what we are focusing on.”

Mike Conway added: “That was a mega lap by Kamui; everything worked perfectly. We were all watching as it unfolded and we could see it was going to be quick. When we saw he got a 3mins 14secs we were amazed. But Kamui has been flying all week so we were confident he could do it.”

“It’s great to start from pole position but that is only a small target; the main target is still to come”, he added.

Sebastien Ogier: “I am not in Spain to make amends for that mistake”

Østberg expects a hot and technically difficult rally near Marmaris

Conway, Kobayashi and Lopez on pole for Toyota at Silverstone