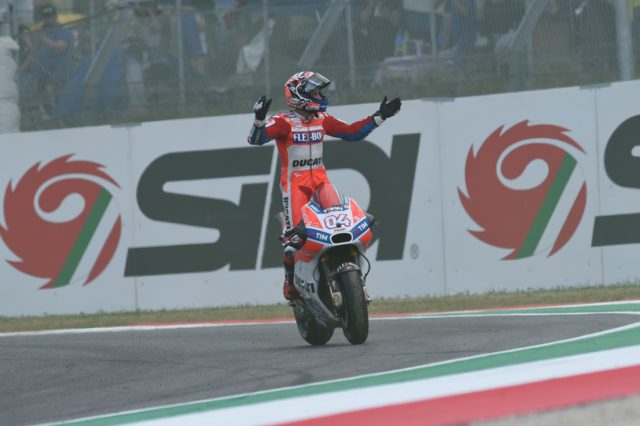 Andrea Dovizioso scored a fantastic win in the Italian GP, held at the Mugello circuit in Tuscany in front of a record crowd of 98,269 spectators. The Italian, who started from the front row after qualifying third, crossed the line at the end of lap 1 in fourth and then fought it out with Jorge Lorenzo and Valentino Rossi in the early stages, before moving up to second behind Maverick Viñales on lap 6. Dovizioso then took control at the front and maintained the lead of the race until the flag, holding off attacks from Viñales and Danilo Petrucci, who were second and third at the finish. 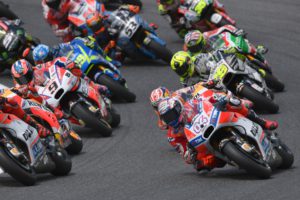 In the standings, Dovizioso has moved up into second place with 79 points, 26 behind leader Viñales.

“It was a fantastic day for me but it started badly after a sleepless night because of a bit of food poisoning”, Andrea Dovizioso commented.

“I didn’t have much energy, but I knew that the bike was going to be strong, because we worked well throughout the weekend. I also had a lot of support from my fans, physiotherapist and family and this made a big difference.”

“Despite the fact that I wasn’t at 100%, I was able to administer the race even though I wasn’t the quickest man out there. But I did a perfect strategy, and moved into the right position at the right moment. I rode really smoothly, I never forced the pace excessively and this made all the difference because Mugello is a track that physically wears you out and in any case the tyres did not allow me to push too hard. Finally we did it: winning at Mugello is really something special!” 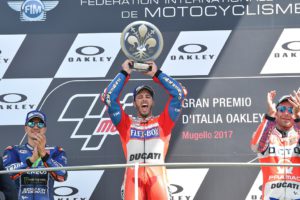 Andrea Dovizioso: “Finally we did it: winning at Mugello is really something special!”

Jorge Lorenzo was not this content with his race.

“Even though I got off to a good start and I led a race for the first time this year, unfortunately lap after lap my pace started to slow. I continue to lose time under braking and for the moment I can’t get the best out of the bike’s assets. But above all I can’t be fast through the corner, which is one of my strong points. I was passed several times on the inside without being able to react. The positive thing about the race is that Andrea won and Danilo came third, demonstrating that today the Ducati was the best bike on the track. Back on Friday I said that the bike was good enough to win and I’m happy for Dovizioso because he deserved it”, he added.

“At Mugello we saw two Ducati bikes and two Italian riders on the podium, with Andrea on the top step, in a fantastic race with no real retirements. And in the end the best man and bike won”, Ducati Motor Holding’s CEO Claudio Domenicali said. “We had an extraordinary bike and Dovizioso scored an exceptional result. This is the result of great team-work, and I think all Italians will be proud of it.”

Honda hopes to overtake Renault before end of the season

Fernando Alonso: Being able to keep the car in the top 10 was a...