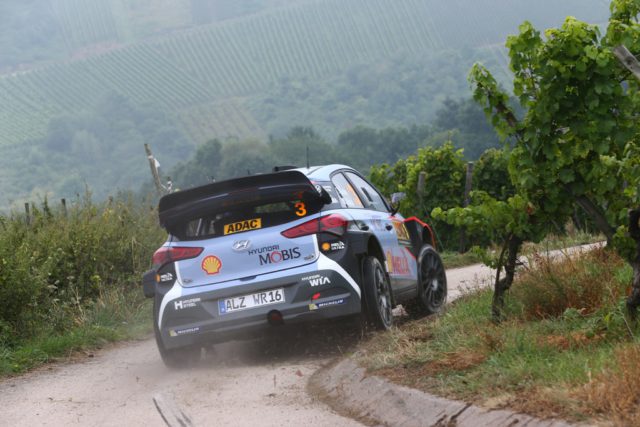 The ADAC Rally Deutschland (August 17-20 2017) has always been one of the most challenging rallies on the WRC schedule. This is all the more true this year since a series of new tests is waiting for the world rally driver elite in Germany. Star rally drivers such as Sébastien Ogier or Thierry Neuville are running an intensive testing programme in preparation for the ADAC Rally Deutschland. To stay ahead of the game in the challenging German asphalt rally, the major works teams such as Hyundai or the M-Sport implement numerous technical adaptations to their rally cars.

Apart from a variety of surfaces, asphalt does not equal asphalt in the Rally Deutschland. On the Baumholder military range, where the infamous Panzerplatte Special Stages are scheduled on Saturday, 19 August, a variety of surfaces challenges the teams, from pure concrete to concrete interspersed with rocks, to rough asphalt to sections of cobblestone pavement. Here, the right selection of tyres can be decisive since the surfaces are very tough on the tyres. On top of all this comes the weather to make a real conundrum for the WRC team strategists. As experience has shown, weather conditions are quick to change in the Saarland, Palatinate and Eifel regions hosting the rally.

To cope with the rally’s variety of surface profiles, the teams usually opt for a very precisely balanced setup answering to a variety of technical requirements. The one underlying commonality of WRC car setups for the rally Germany is that, unlike for the WRC gravel rallies, chassis setup is considerably lower. The suspension setup is stiffer and suspension travel is shorter. To cut weight, lighter components are being used in terms of shock absorbers, transverse links and tie rods. Since asphalt is generally smoother than gravel, the top teams also dismantle some of the underbody protection to save additional weight. 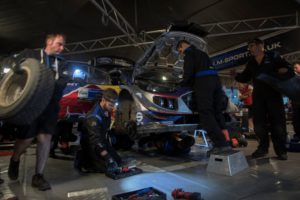 Challenge #3: the choice of brakes

The numerous 90-degree turn-offs, hairpin turns, up and downhill passages of Rally Deutschland are extremely tough on the brakes of the WRC cars. What is more, the distances to cover in some Special Stages are long. The Panzerplatte marathon for example is close to 42 kilometres. To live up to such challenges in Germany, the teams use the largest brakes in the whole WRC circuit. The brakes must be both aggressive and provide very robust performance. Not to mention the fact that the rim sizes used for the German asphalt rally are also larger than those used in the WRC gravel rallies.

Top teams go back to testing before the ADAC Rally Deutschland

After five consecutive gravel rallies (Argentina, Portugal, Italy, Poland and Finland), in Germany the WRC is back on asphalt. Multi-day test sessions just before the rally are a virtual must for the works teams. Teams use tests to find the optimum differential and damper setup. They also serve to reacquaint the drivers with the specific rigors of asphalt driving. The tests also allow the teams to have a look at the many new challenges the organisers of the ever-evolving Rally Deutschland hold in store for them every year. 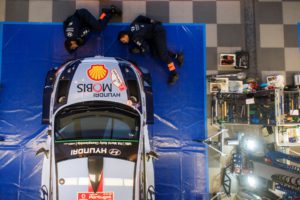 More important than even in other WRC rallies, is the input of the so-called Gravel Crews. These team spies drive the Special Stages shortly before the start to brief the drivers on the latest road conditions. This information may be decisive in the tight vineyard Special Stages where the drivers cut corners. These shortcuts leave a lot of gravel and dirt on the roads which may change the grip level from one instant to the next. Thanks to the quick briefs from the Gravel Crews, the top drivers can adjust their driving accordingly.

Seven cities in 20 days: The BMW iFE.18 is on a virtual world tour

Verstappen does not agree with his Monza penalty